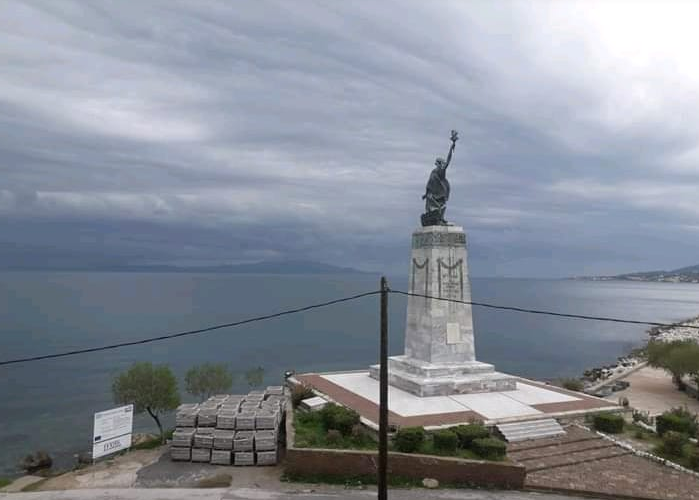 The last months we have mostly been provinding updates and context regarding the broader situation on the island. This time however we thought it might be nice to provide and update on the current activities of NBK in times of Corona.

We where forced to stop distributing in the open, but that didn’t stop us from reaching the people that regurarly attend. We are still giving out food every day, to those who are left behind. We give out approximatly 200 meals a day to people and families on the move, and currently also local people who are in a vunerable position due to the restrictions on movement and threat of Corvid-19 in place in Greece.

We are still giving out foodboxes to migrants living in Mytillni that don’t receive any support from other sources. A foodbox consists of fresh vegatables, dry food, oil, tea and sugar. People receive them once a week and they are meant to supplement people’s costs of living. All of this is ofcourse done with the proper hygiene measeures in these times.

Like the rest of the world, Lesvos has been affected by Corona, even though as of the time of writing the amount of cases is relatively low. The restrictions placed on movement around the country forced us to heavely restructure our activities. It doesn’t mean we have to stop our activities alltogether. Dispite the current crisis plagueing the world, people still need support. Now even more then before. The situation in Moria has not improved. In fact it has become worse. But the problems that prevent the people from taking washing their hands every 5 minutes and keeping 1,5 meters distance are not new. They where there 6 months ago just the same. Corvid-19 does definitly pose a real tangeable threat to the people who are forced to live in the prison that is called Moria, but it only serves to underscore the structural problems that where present from the day it was openend.

No one knows how long this corona crisis will last, and the after effects are already promising to put an even greater strain on the already fragile situation at europe’s borders. These dark clouds looming on the horizon are not only gathering above Mytillini. We are always gratefull for the donations we receive, but we would also like to point out that there are many more places that need support right now, that often get overlooked. Lesvos is quite well known, and also Moria is a place that receives a lot of attention internationally. But lets not forget about Chios, Samos and Patras. Or Serbia or Calais, or many more. We stand in solidarity with the people who share our struggle, in times of corona, but also after. 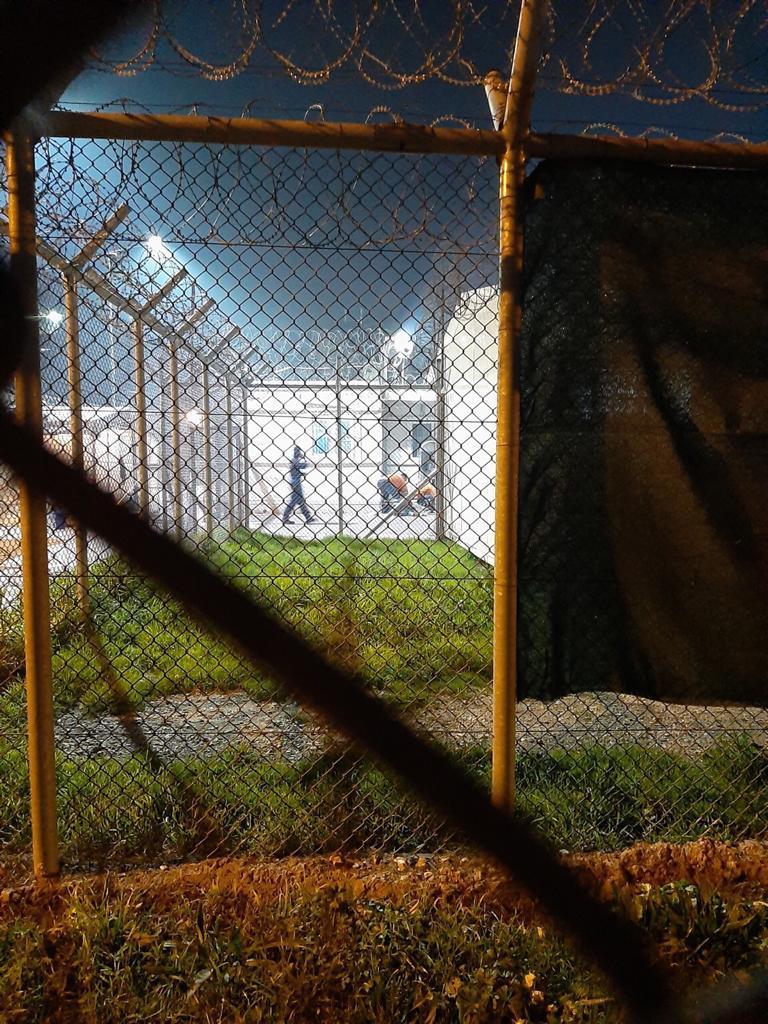 After three days of hunger strike the prisoners in Moria were forced to eat again. There have been several concerning allegations of police violence during the week, which people inside have told their friends through the fence. A special-forces police unit was present for the duration of the strike, with a brand of violence reportedly even more severe than usual. Detainees were removed from their cells for interrogation and at least one of them was beaten.

Apart from a few brief exchanges, shouted across, we still don’t know the details of what happened inside the prison to stop the strike. Police have blocked prisoners’ usual communication channels with each other and with the outside world.

The prisoners went on hunger strike to demand their freedom and to have their voices heard. The police did, and continue to do everything they can to prevent this. They were not alone – last week (?) police also violently suppressed a hunger strike in Paranesti detention centre.

The suppression of this hunger strike makes clear the determination of the state and its attack dogs to stifle the voices of people incarcerated in detention centres, pre-removal centres and prisons everywhere. We must not forget, that the a hunger strike is the last resort if all other possibility’s of protest have been stripped from you. By committing to this, people have to struggle against their survival instinct, because it’s the only option they have left. What kind of measures against them can make them also lose this option.

We demand a world free of prisons. A world free of police brutality and uniforms. A world where no human can be incarcerated for being born in the “wrong” part of the world, the colour of their skin or their sexual orientation. We demand immediate closure of Moria, and of all structures that produced and depend on it.

We demand and fight for the end of this system built on and sustained by cages, prisons and violence.

Free all prisoners in Moria
Shut down the prison and the whole camp.
Shut down all Detenion Centers 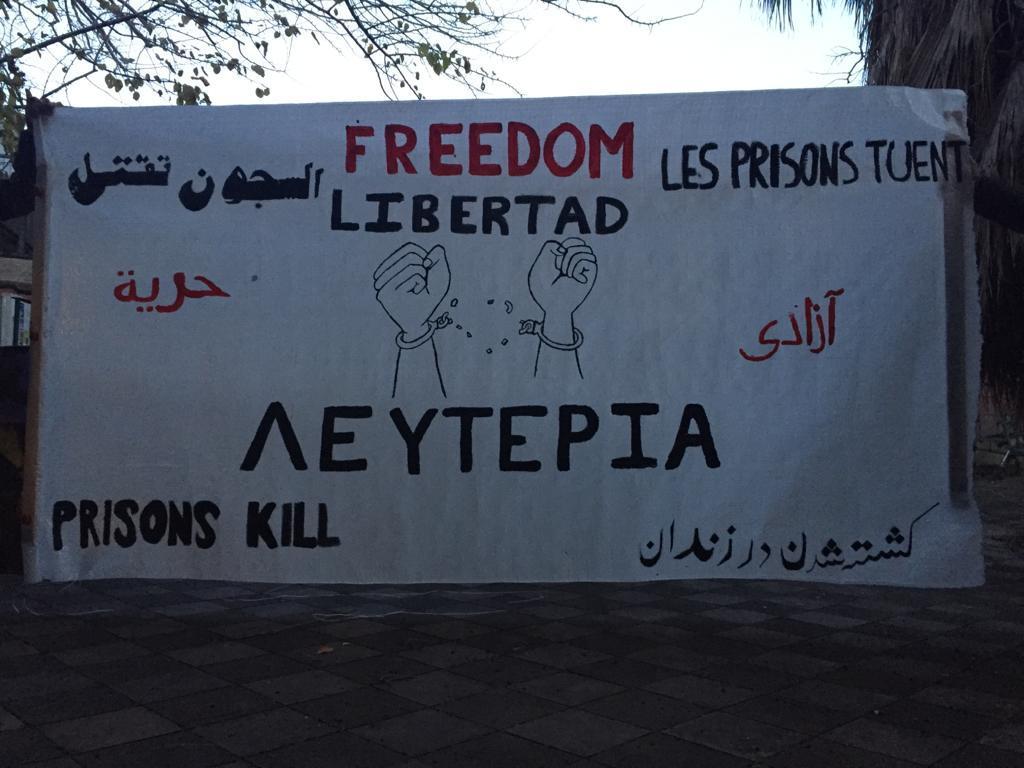 Three days ago, on 5th of April, the prisoners in Moria’s pre-removal detention centre went on hunger strike, to demand their immediate release.

The cops in the prison responded with ridicule, intimidation and violence: mocking the strikers, conducting a raid, taking people for interrogation, and beating one of them. Four detainees sewed their mouths closed in protest. A doctor was called to come and remove the thread by force.

This is now the second hunger strike within a few days in pre-removal detention centers in Greece. Already on 3rd April detainees in Drama’s Paranesti detention camp went on hunger strike after being served inedible food. One detainee reported: “70 riot police entered the camp last night and beat everybody with batons”.

These days governments across the world have been releasing people with short sentences from prison, while the Greek state continues to insist that no migrant detainees will be released.

The men here in the prison are held in administrative detention and have committed no crime. They are detained only because of their status. Some because of their nationality, some because their asylum claim was rejected, some because they tried to leave the islands, some even because they signed up for supposed “voluntary return”. Many of those with rejected claims haven’t even had the opportunity to apply for asylum, because of recent legal changes discriminating against people who don’t speak the colonialist language of the country they fled from.

They are awaiting deportation to Turkey, despite there being no deportations scheduled for the foreseeable future.

The situation inside the jail has reached crisis point after the implementation of ‚New Democracy’s‘ new asylum laws. Authorities have increased their efforts to reject claims, and carry out deportations. People have been deported despite ongoing asylum cases. They have been deported without ever having set one free foot in Greece.

Those now in prison have no hope. On 6th January a 31-year-old man was found hanged in his cell after being placed in solitary confinement, in an isolated cell. Several suicide attempts have followed this. In one case, a man attempted suicide and was deported the following day. Police violence and harassment continues, and in more than one case has both preceded and followed suicide attempts by those imprisoned.

In Solidarity with the hunger strikers NBK

Free all prisoners in Moria

Shut down the prison and the whole camp

Shut down all detention centers