“Concerned citizens” and angry shop owners formed part of a 40-strong fascist mob at Saphous Square last Tuesday, gathered in an attempt to evict refugee protesters from their month-long occupation of the site. They were soon joined by police. After extensive negotiations between the protestors, the mayor, and the police, the protestors agreed to pack up their tents. Verbal abuse and the threat of physical attack from the surrounding mob left the protestors with little choice but to do so. They were promised a night in a ‘warm place’ in return, but this was never delivered, and instead of decent government-provided shelter they were brought to sleep in tents at House4Humanity.

Following this, the protestors returned to the square the next morning, welcomed again by the fascist mob. Police in full riot gear showed up to separate the parties and to begotiate again. After some time the protestors were offered a three-day stay in Pikpa, an independent refugee camp, with the obvious question of what will happen once the three days are up left unanswered. The protestors announced to return to the square if not offered any solutions after this time. During the negotiations the gathered fascists shouted violent verbal abuse, directed at the protestors and those in solidarity with them. At one point this broke out into a physical attack, with 25 men attempting to assault 4 women attending the protest in solidarity. In the end, luckily, no one was hurt.

Currently Saphous Square lies empty, save for a handful of bored police. For now we wait to see where this leads us, with a verdict promised by Saturday.

The importance of the Saphous Square protest, and the need for it to continue, was demonstrated again this morning. Despite one individual’s lawyer appealing his deportation order, we learned today that this man remained on the list for deportation to Turkey. The deportation has been stopped for now, by pressure from the lawyer, activists, and journalists on the police.

However, the question remains: what if this individual had not been one of the lucky few represented by a decent lawyer? Most likely, he would right now be in a Turkish detention centre, and in a few months, on a plane back to Kabul.

Nearly every week between 7-20 people are forcefully deported to Turkey. The situation is almost impossible to monitor, as access to the prisons is strictly limited to lawyers and close family members, and there are nowhere near enough lawyers on Lesvos to provide access to legal aid for the detainees. We know that today was not the only attempt to illegally deport someone, and we can be sure that the cases we hear about are the very tip of the iceberg.

Today there is general strike and a demonstration called by the major. Although they demand the refugees to be able to leave the island we should not follow a racist argumentation that demands to decongest the island because refugees are a “burden” for the local population. Our demands are to open all borders and decent living conditions for all people, on the islands, on the mainland and in the rest of Europe. 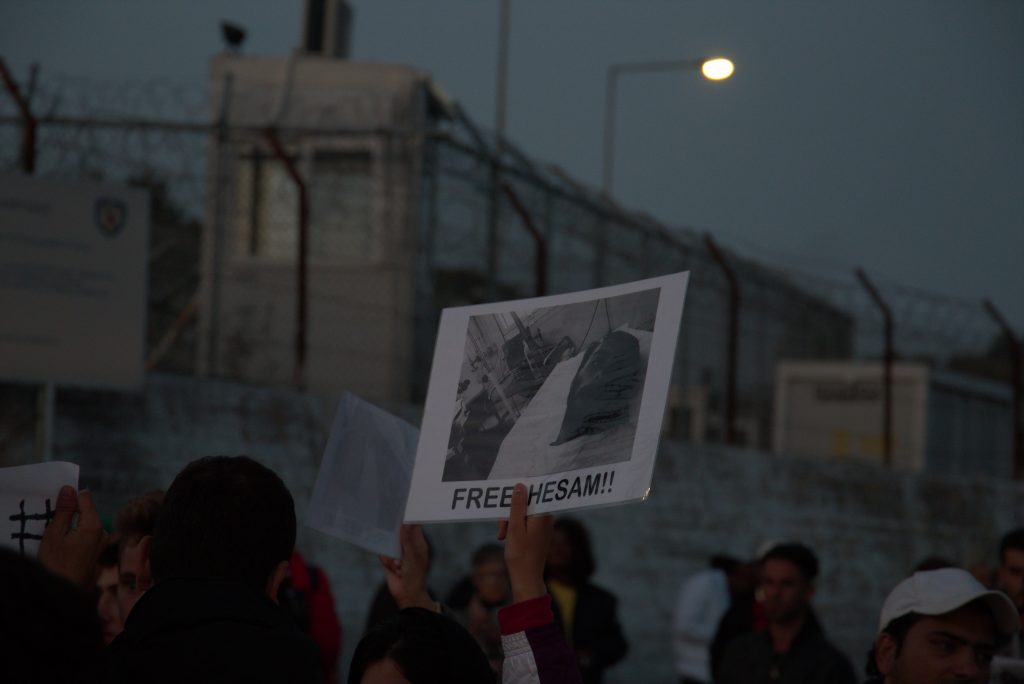 The occupation of saphous square in Mytilini is now happening for the 27th consecutive day. For almost one month now refugees from different countries of origin, different age and gender have stood together against the conditions on the island and for their right to freedom of movement.

On Tuesday afternoon, the protesters called for a demonstration in front of Moria. The reason for the protest was the arrest of Hesam, one of the occupants of saphous square. His asylum was rejected and he faces deportation to Turkey and then Iran. He is afraid that he will face further religious persecution upon his return to Iran.

At 4.30 in the afternoon around 30 people gathered at first in front of Moria. Quickly they were joined by many people living in Moria camp that formed a loud and powerful yet peaceful gathering. 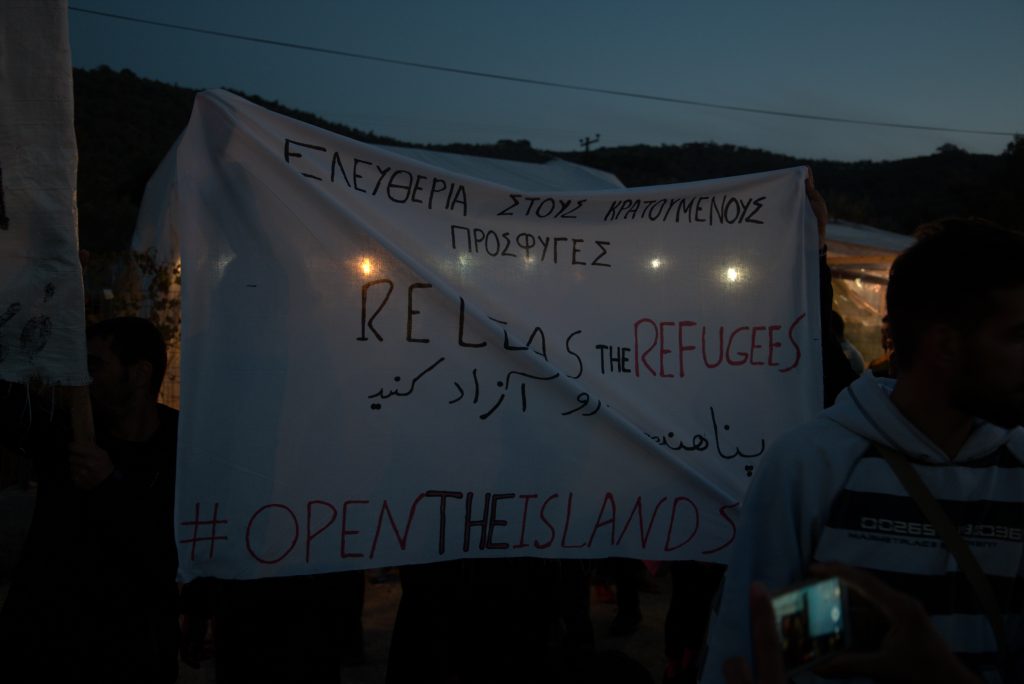 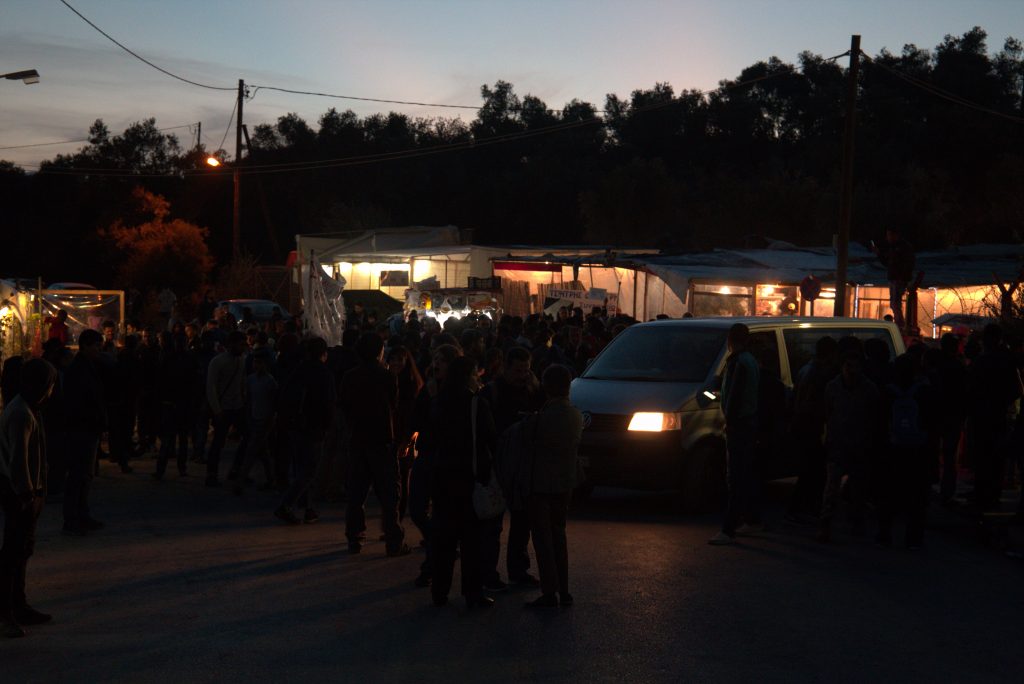 Refugees have been protesting against the unsafe conditions in Moria and for Freedom of movement for 20 days now, for 19 days they have been occupying the central square in Mytilini.

Despite harassment by the police and nights that always get colder, they are still present and continue to fight for their rights. Some of the protesters started a hungerstrike several days ago.

The protest was started by mostly families after an outburst of violence inside Moria camp on October 20th.

At the same time in Athens, several people are on hungerstrike. They demand to be reunited with their families in Germany and protest the delays of family reunification by the German government, letting people wait for months before being united with their loved ones.