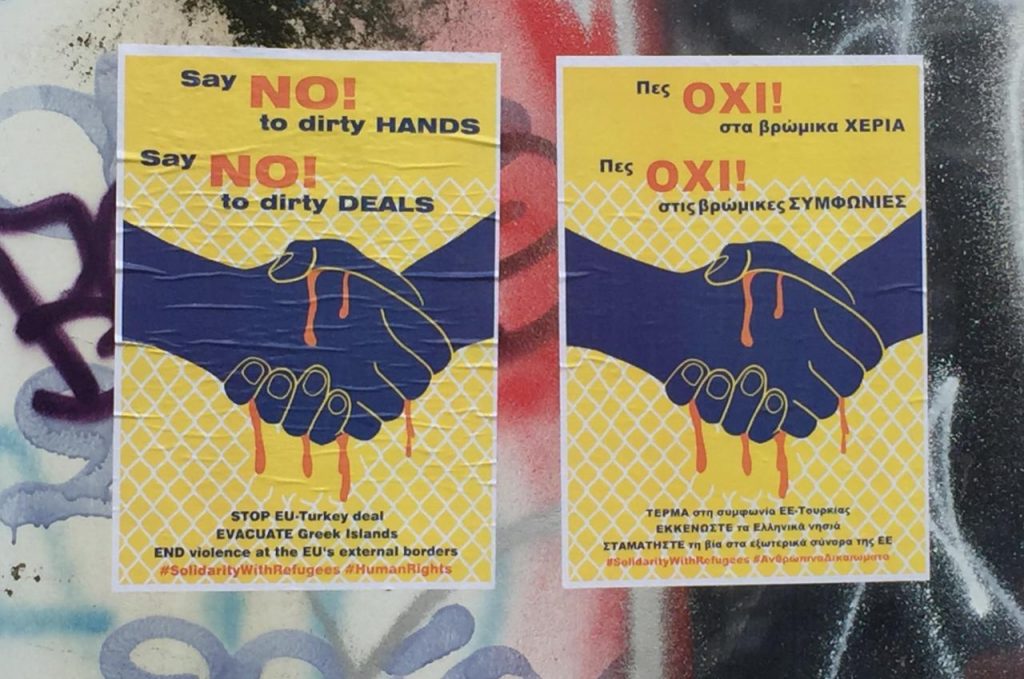 It happened as it was to be expected: Four years of standing on the sidelines have resulted in a catastrophe. 40,000 human beings, penned up in hopelessly overcrowded EU-hotspot centres like Moria on Lesvos Island, living under squalid living and hygienic conditions, will soon face the deadly disease. European countries close their borders and enforce social distancing in order to curb the spread of the pandemic. But the Greek health system, already severely weakened by austerity policies and the economic crisis, is in no condition to guarantee the medical care for refugees once the pandemic starts spreading widely. Yet still, the EU does not answer the numerous appeals to evacuate the centres and to bring those affected to safety. Internment is the EU’s answer.

These policies are entirely in line with what we have witnessed at the Greek-Turkish border in the recent two weeks. An unprecedented brutalisation of EU migration policy, coupled with the unscrupulous violation of fundamental human rights, European law and the Geneva Convention on Refugees.

People seeking protection in Europe are being shot at with tear gas, beaten up, stripped and illegally pushed back across the border. In the Aegean sea, refugees are aggressively attacked by the Greek coast guard, engines destroyed and rubber dinghies stabbed at.

Even what was unspeakable in 2015 has now become reality: Even what was still unspeakable in 2015 has now become reality: The border is being defended with live ammunition and several people have been shot at the Greek-Turkish Evros border. European border policy has thus turned from a policy of passively acquiescing to death at the external border to one of actively killing.

Right-wing extremist networks publish bounties for volunteers and employees of international organizations on the Greek islands. They are being hunted down and brutally beaten up by fascist mobs. Fascists from all over Europe arrived on the Greek islands, social centres and solidarity structures were set on fire.

In addition, the right to asylum has been suspended for all persons who have entered Greece after March 1, 2020. The Greek government announced, through its spokesperson Stelios Petsas, that it would not accept any asylum applications from newly arrived persons for one month. Newly arrived refugees are being held under ad-hoc detention conditions, such as in the port on Lesbos, while the government is intent on deporting them.

However, they are not only being denied the right to protection; according to media reports, there have even been several hundred cases where people have been sentenced to four years in prison for “illegally entering the country”.

(statement by different groups, find the full statement at: https://bordermonitoring.eu/verein/2020/03/refugees-welcome-dont-shot/) 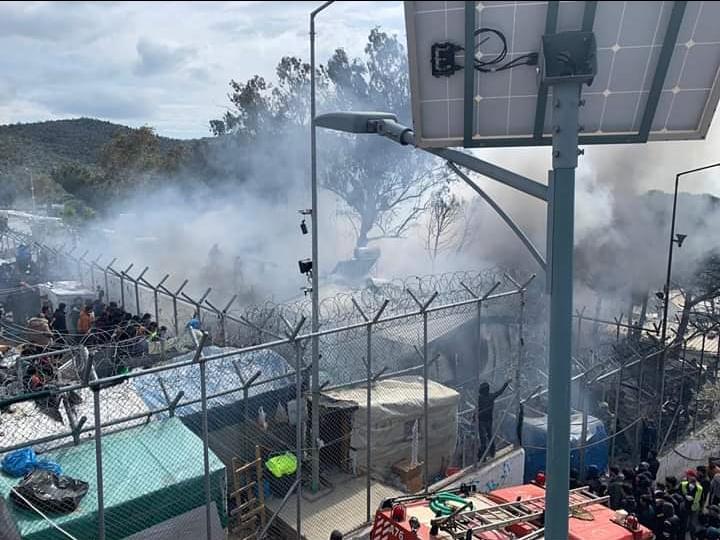 Over the last week the corona virus has almost completely taken over the news cycle. And the measures that are being taken against it especially. Self isolation, “social distancing”, curfews, bans on public gatherings, fines…..

But what does this mean for Moria, the biggest monolith of inhumanity within the european fortress?

As off tommorow it means:

1. Restriction of movement between 19.00-07.00.
2. One person per family is allowed to go to the city per family. This will be checked by the police.
3. Every hour only 100 people can go outside of the camp.
4. The police is responsible for the enforcement of these measures.

Earlier news reports also talked about new fences and things like this, but this remains to be officially confirmed. However, the already annouced measures will have a siginificant impact on an already volatile situation. And the responsability of upholding these new measures fall upon the state’s very own attack dogs, the police. Time and time again have they shown that they care very little about migrants, and their whole excistence is an affront to the freedom of movement.

The increased xenophobia that is terrorizing the island is only amplified by the spread of the “foreign” corona virus, and this too will hit the people trapped on the move. For us, it just makes it completely and utterly clear that places like Moria shouldn’t exist. Europe is forcefully and knowingly putting human beings in positions that are in-human. And the effect that that has will now be amplified a thousandfold.

The conditions in the camp are well known and documented. Much of the conditions imposed on the rest of the world to stop the spread of the virus are impossible to maintain in an overcrowded migrant camp. Hygiene is minimal at best. All space is shared. There is never enough food, and some people stand in line for days without getting any.
People used to be able to go outside of the camp to get additional supplies, and now this too will be next to impossible.

People will be trapped in a place that is overcrowded, dirty and without access to regular meals. It doesn’t take much too realise that it’s a deathtrap. 3 months ago it was impossible to imagine that the situation in Moria could get any worse. And yet somehow it did. And also our fear has come true. The camp will be closed, and a lot of people that came here seeking life, will instead die.