After the last few weeks’ posts where we wrote about the government and its role in the happenings of september, we now want to focus on the police as the executive organ of the state. Concerning the government, we already highlighted the fact that every government should be abolished and we as society should think about how we want to live. The same goes with the police: any form of policing is a barrier to a free society; its role is to enforce the law which in the current political system is capitalist, patriachal and racist. As the institution of the police arises from the concept of the state, strict obedience and hierarchy, it’s no wonder the profession tends not to attract the nicest of people. All of these generic critiques can be applied to the Greek police and although we seek to abolish the police in total, we want briefly to introduce the Greek police.
After the fall of the military regime in Greece in 1974, some of the former members of the junta could become police officers. Also, the Greek police are highly centralized which makes hierarchy and obedience even more necessary. While being influenced by the right from the beginning on, there were also some social-democratic parts of the police forces which got abolished by conservative governments over the time – e.g. the ‘Special Mission Units’ (MEA). So while being essentially a right-wing institution because of the role the police have in our current political system, with the eradication of social-democratic elements it moved closer to the fascist end of the spectrum ove the years. It comes as no surprise that there are big overlaps of the police and voters/members of the fascist party Chrysi Avgi (Golden Dawn) – especially in the riot cops unit ‘Units for the Reinstatement of Order’ (MAT). It is also no surprise that the Greek police are regularly accused of brutality and even the use of torture.

Of course it is not a suprise that the Greek police – with a clearly conservative attitude, operating as the long arm of a right-wing government – is and always was a big pain in the ass. Ever since migrants and solidarians came and have been active on the island of Lesvos the police have done everything they can to complicate life and work for both groups. Their actions following the fire were entirely in line with their actions over the years.
Their first move was to guarantee that migrants couldn’t reach the city of Mytiline by building big roadblocks while the fire was still raging. Just the day after the fire, on the 9th of September, there were already two police roadblocks around Panayuda, one roadblock close to the powerplant of Mytiline and one in front of Kara Tepe. Several times when migrants tried to get to Mytiline and found themselves in front of the roadblock they were teargased by the police, some people even got detained. Two days later came the arrival of riot cops and water cannons: 9 units of riot police arrived on the island by ferry – in addition to 4 Crime Prevention and Suppression Teams (OPKE) and a team from the Attica Security Directorate.
The water cannons were placed at the blockade near Kara Tepe – visible and threatening for every person who was around; and located close to the area where construction had just begun on the new temporary camp the very same day. As the construction became obvious and thousands of people were still trapped in the blockade, demonstrations of different groups of migrants began on the 11th of September and lasted until the 13th. Again demands for freedom were answered with teargas and violence. At no point did the question of whether the means used by the police were inappropriate arise in public – as if teargassing homeless people is the most normal thing in the world.
Parallel to the demonstrations there were armored police around the city checking migrants for papers and causing a feeling of insecurity and fear for every migrant living in Mytiline. This procedure lasted for several days – with the goal of making sure no migrant was moving or hiding illegally in town and forcing everyone to go the new camp. On the 15th  a paper was published and distributed with the request for migrants to go to the new camp – at that point it was assumed that police would implement that order. 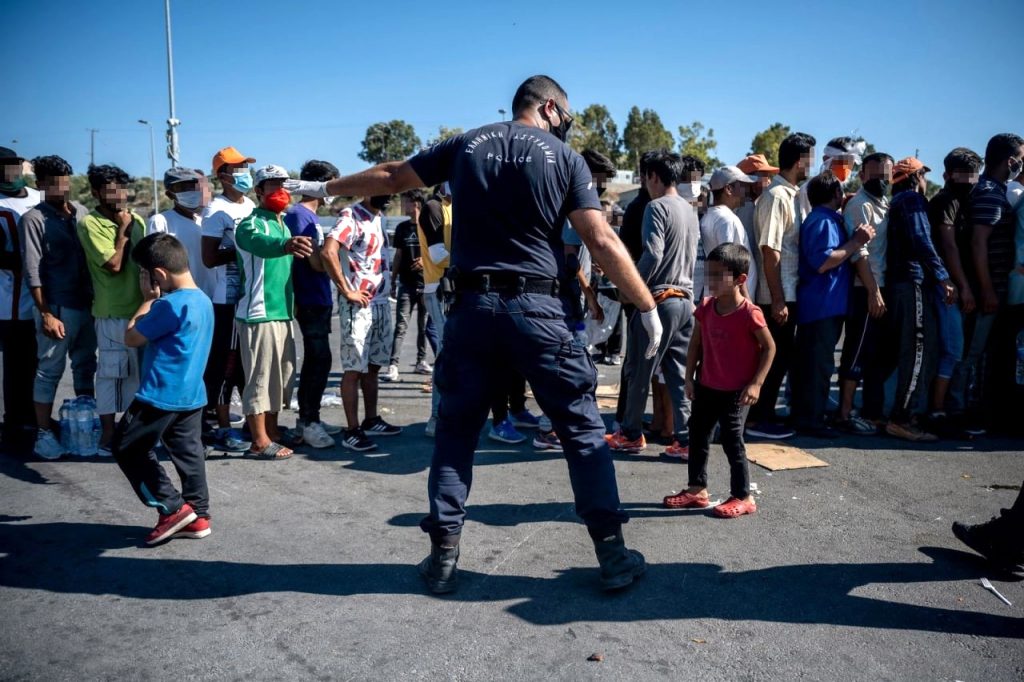 After the arrival of 200 more policemen on the island, the operation “calm force” started on the 17th of September – which was the forced avacuation of anyone still on the street from the street and into the new camp. Practically, this meant that massive lines of armed police started to walk from one end of the blockade to the other pushing anyone in the way into the camp. The second eviction happend one day later and the whole street was emptied by four o’clock in the afternoon. 7000 people forced into another jail. Not suprising that ever since police have been stationed in front of the new camp and also patrol around – for example to make sure that NGOs don’t give food to migants outside the camp. Also, they enforce all inhuman new regulations for the camp: limitations of numbers of exit and entry, the exit hours from 8am to 8pm, keeping the camp closed on sundays and public holidays or checking people and their bags with metal detetectors when entering and exiting.
And just recently a video was published showing how two young migrant men were beaten up by the police on their way back from the supermarket to new Moria. Afterwards this was justified by explaning that these two guys were too far away from the camp according to Covid regulations. The incident happened close to the camp.
Knowing the truth it was more than cynical when Michael Karamalakis, chief of the Hellenic police said on  human rights day in december:
“The Hellenic Police, in carrying out its work, guards and safeguards as the foremost custodian the good of security and individual and social protection against any form of violation of constitutionally guaranteed rights and freedoms, with high institutional, value and moral wisdom.”

The impact of the police on solidarians on Lesvos is of course mostly linked to actions supporting migrants which means interferences when solidarians interact with migrants. Therefore, it has to be clear that these interferences mostly affect migrants and not solidarians. Preventing support, for example, by cutting off food distributions is not only about giving food in their view. It’s a crime and – as far as the state is concerned – is part of the ‘pull-effect’ drawing more people to Europe. Yes: queuing up for food is too alluring to resist.
But at the end of the day, it’s not the solidarians who go to bed without having eaten something. And at the end of the day, most of the time it is not the solidarians who might get deported if a distribution is interrupted. And – unlike migrants – solidarians don’t need to fear violent altercations with the police that much as it would have other public consequences if a person from central Europe is beaten up. Keeping this in mind encourages and emphasizes the necessity of solidarity. But although repression is mostly aimed at migrants, the behaviour of the police makes things far more difficult for solidarians. Their presence alone makes it harder and more stressful to work as the steady intimidation and feeling of constant threat has an impact on oneself. It’s annoying, exhausting and reduces our collective capacity.
Some negative impacts on migrants of the criminalizing of solidarians were seen in September before the fire broke out: on September 5th, there was a police search performed by special units at Mare Liberum – an organisation that documents human rights abuses at the European external border. Not only their ship was detained but also all electronical devices confiscated – preventing Mare Liberum from carrying on with their work and causing financial damages. On the same day, a food distribution was interrupted in Mytilini. The repression – of course – reached its climax after the fire and during the blockade: already on the night of the 8th and 9th of September – the night of the fire – one of our water distributions got aggressively stopped by the police. Also other solidarians who didn’t take part in mutual aid but took to the streets expressing their solidarity with the migrants faced repression as a powerful antifascist demonstration got teargased in Mytilini on September 9th. The list of attempts at intimidating solidarians durind this time is endless. 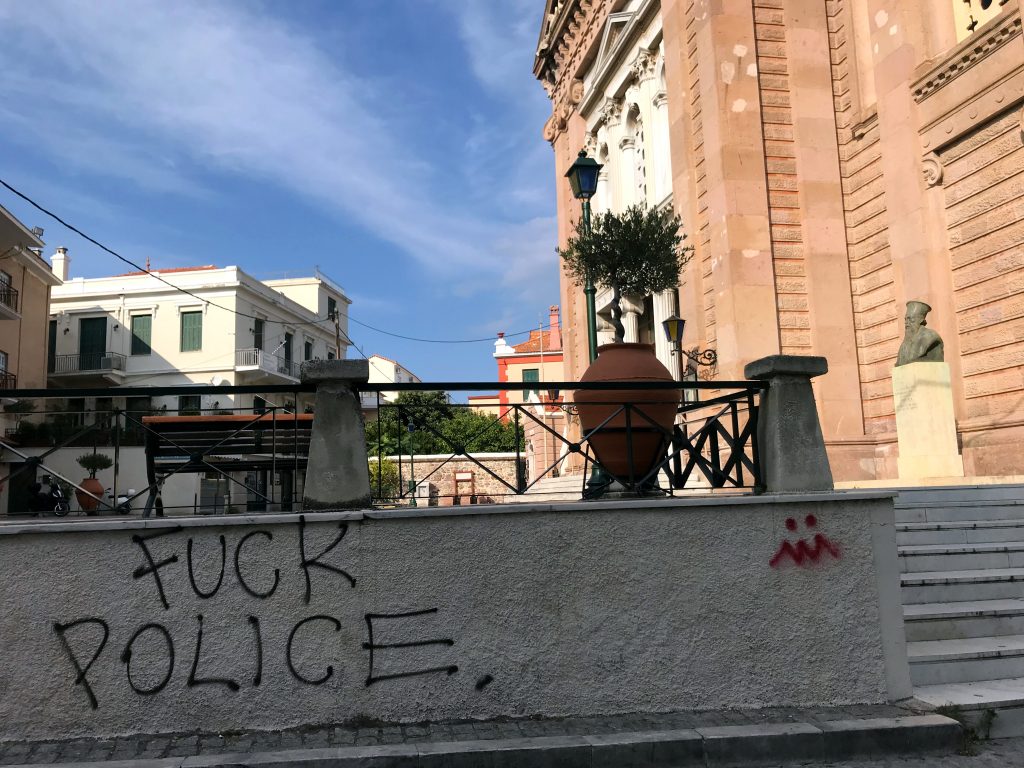 As we already wrote in out text about the government, the repression also continued after the new camp was built and after it got a bit more calm in the streets. At this point, it must at least be mentioned that the police are investigating nine NGOs and 13 people because of human trafficking, spying and more. And while the residents of self-organized camp Pikpa got evicted, the police made it impossible for solidarians to interact with the residents. Even waving to them led to getting pushed away roughly by the police who showed up with three different units within the next second. As there’s again a lockdown, it became harder again for solidarians as you need to send a message via phone or have a paper with you that is saying exactly for what purpose you’re outside. There are six possible reasons of which one is to “help people in need”. But of course this is most of the time not accepted by police as a reason if you’re helping migrants. The result is a fine of 300 Euro – which was ‘only’ 150 Euro in the first lockdown.
For us, it’s a shame that the Greek prime minister came to Lesvos on new years eve congratulating th border police for such a successful year – which is for them a year, in which less migrants came and more solidarians got fined. Thanks for your work in repression, thanks for carrying out push-backs, for offensively taking away people’s human rights and having the audacity to declare this as a successful outcome of your own authoritarian political agenda. The police as the executive agent of the state always enforce and protect the cruel policies of the government. Their function is to defend and reinforce systemic hierarchy. Following from this, the institution has tendencies towards racism and fascism. Therefore, even with the nicest government in the world, the police would be an organ of repression. There is no police like no police. And always remember: if you fear repression, repression has been successful. Let them not break your will and let’s keep fighting for solidarity!