As is written in our manifesto, we reject the border-regime enforced by governments of the European Union and the idea of national borders in total. We want to overcome these borders and the people who suffer because of them. An anti-fascist society is a borderless society;  much of contermporary fascist and far right movement is built areounf the idea that borders need to be strengthened. Migrant solidarity is anti-fascist work, but migrant solidarity also means participating in anti-fascist struggle more generally. It’s important to note that fascists are always racist, but fascism insists of more than racism – for example also strong hierarchies concerning the state and the society in general. Therefore, there are fascists on Lesvos we need to face but also people who are ‘only’ racist. Although fascism consists of many ideas we reject, there are also non-fascist racists we have a problem with. Something which is important to analyze: as the main population of Lesvos was welcoming migrants in the mid 2010s the facist party Chrisy Avgi (Golden Dawn) got many votes. Now there is a more generalized atmosphere of hate and Chrisy Avgi has gotten less votes. But fascists gaining less votes doesn’t mean people getting less racist.

When writing about fascists and racist we need to be clear about possible reasons for people becoming racists or fascist. We live in a capitalist, racist and patriarchal society which is built on the division of people. Not only this but also the state needs to divide society into people who rule and people who are ruled over. For us, the alternative is a non-hierarchical society based on mutual aid. For fascists and racists the alternative is to become the higher-up n the hierarchy, to become the oppressor. Therefore, we have nothing in common with fascists as their aim isn’t to emancipate everyone but at most themselves. 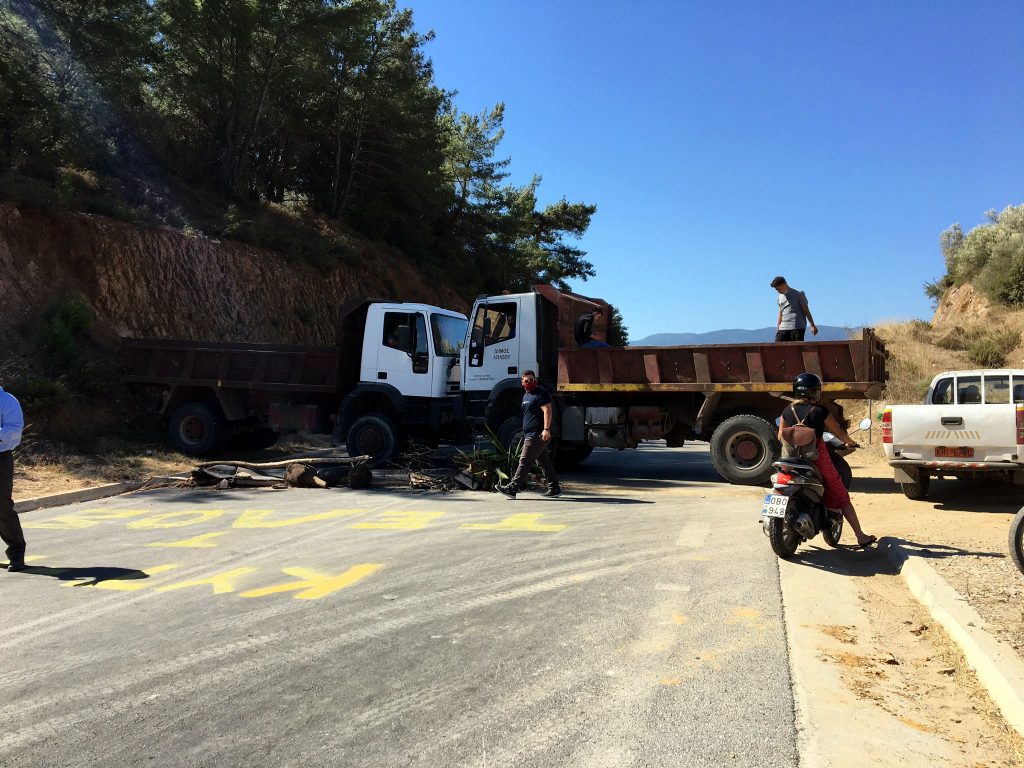 Also, the economic situation on Lesvos makes fascist tendencies more likely. Although capitalism is a big crisis in itself, the recent financial crisis worsened the situation of many Greeks. And, failing to identify capitalism as the root of their problems, locals look to migrants when trying to understand their worsening conditions. Migrants being forced to live in camps at the external borders of the EU stabilize these thoughts. Of course, when people are forced to live in a camp without good infrastructer and living conditions, it gets messy. Your olive groves being squatted or your animals getting stolen isn’t nice. But the point is that it is the border regime that creates the conditions in which migrants need to squat an olive grove or steal an animal. It’s the EU border-regime that’s responsible. It’s the capitalist idea of letting people only come to Europe if they can be exploited workers. It’s the racist idea of the division of ‘races’ and ‘cultures’. By criticising the messy things happening, fascists and racists make an objectively true observation. But by placing responisbility on the migrants, they come to an objectively untrue conclusion.

The racism on Lesvos could again be seen in September last year. On the night of the fire, we could see many people driving around with motorbikes probably looking for migrants. As some of them had bats with them, we can be pretty sure that they were fascists and that they wanted to prevent migrants from getting to Mytilini by any means necessary. Their hatred concerned migrants but also solidarians – something you can see in the experience report from Moria in our category ‘the night of the fire’.

During the blockade, an angry mob of fascists, racists and angry locals stood for days in front of the area where the military planned a new camp for migrants. It wasn’t even close to the city,; they chose a place where migrants would not have been so visible – which is a common tactic throughout whole EU. But for the ‘protesters’ the only point was that there should be ‘no migrants at all’. To ask, who is a migrant, who a citizen, where does someone take the right to prevent another from moving freely is a question that leads too deep into racist and fascist theories to be written down here. Also, it is ironic that many of the people who now want Lesvos to be ‘freed from migrants’ have ancestors who were migrants.

Already in February/March the pictures of fascists and racists stopping boats from landing and attacking journalists and solidarians in Lesvos had garnered international attention. Also during the blockade there were many situations in which we had to face facists and sometimes were only lucky to get out physically unharmed. One time two solidarians got surrounded by fascists in the middle of nowhere, who first passed by, then turned around and followed them and called another one who then blocked the escape road. The situation was very tense, they came with sticks and were shouting at the solidarians: what do they want, why are they in the country roads, what do they want on this island, asked reproachfully why they are not greek, etc. 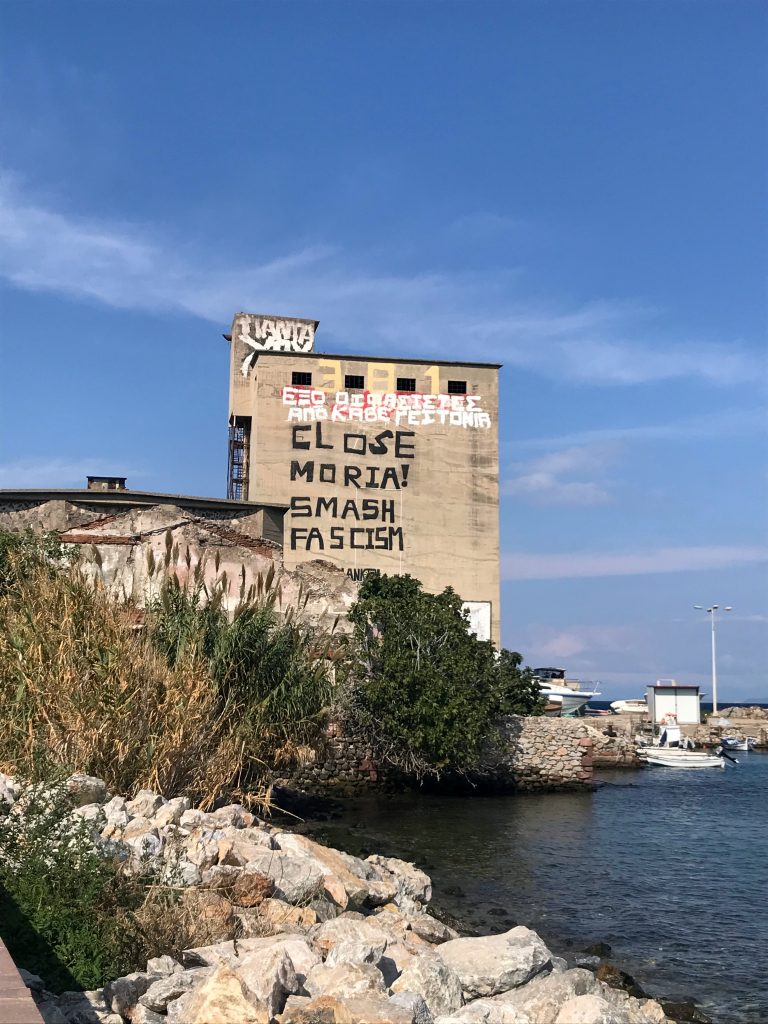 Another time, during a food distribution a shepherd came shouting and threatening solidarians and migrants with his staff. Of course, one can think, this was only one person, but you don’t know how he is connected to other angry locals or even organised fascists. Mytilini is not a big city and they might recognise you. Exactly this happened when some antifascists who were only gathering on Plateia Sapphous, the main square of Mytilini, were attacked by fascists a few days after the fire. Fortunately, they were able to defend themselves, knowing that police would never come to their defense. It was no surprise. Still it was terrifying. It gives another example of the destructive output of fascist ideology.

As already written in the sections concerning the government and the police, the hatred was mostly directed at migrants and not solidarians primarily. Migrants could tell countless stories about having problems with fascists and racists. But facists are not only single people who project their hatred onto migrants. It’s also systematic: we witnessed that some shops had two lines for customers, one for greek and European people – whatever this is – and one for migrants. They had to line up outside because of covid regulations, and it was the norm that the migrant line move much slower than the ‘local’ (read: white) line. Some days, the ‘migrants line’ had to wait until the shop was closed.