As a link between this continuous history and the present, we want to begin our analysis with camp Moria and the occurrence of the first case of Covid-19. The first Covid-case in Moria was a symptom of the many things that go wrong in the Greek and European asylum system. After his asylum procedure was successful, the soon to be infected person took the ferry to Athens. As usual, the Greek state stopped the financial support after some time and forced the person to sleep at friends’ or in Victoria square. So the person came back to Moria having at least a tent there and tested positive on 2nd of September. Until the fire started on September 8, at least thirty-five people tested positive for the virus. Without the fire and with more accurate testing, the cases would have increased far more – something we have seen in the new camp as already by September 20 214 people had tested positive. We, migrants and solidarity activists from all of Europe had been warning for months about the missing hygiene standards and the impossibility of isolation. Anyway, built only for separation and to silence people’s voices and struggles, Moria, the new camp and all other migrant camps are open air prisons without any kind of “appropriate” accommodation. Too many to list here, we saw in Moria a multitude of struggles for freedom and for basic safety often answered with repression.

But let’s take a step back and have a short overview of the history of Moria. As part of the EU-Turkey-deal from March 2016, five Greek islands became so-called ‘hot spots’, on which migrants were forced to stay in order that they could more easily be deported back to Turkey. Being a hotspot, the authorities thought that a big camp on Lesvos was necessary and by the end of 2015 had already chosen the former military base near Moria village as a suitable site. The authorities benefitted from this location as it was already owned by the state, not visible to the main population of Lesvos and – as it was a former military area – it was already censored on Google Maps. To this day when trying to get a view on it via Google Maps, we’re looking at some 8×12 meters big pixels representing in no way the situation in Moria. We need to remember that the goal of keeping people at the European external border  is to make their demands, their rights to stay and to live, and their struggles for freedom invisible,  and is central to the European political strategy concerning migrants. This political strategy reveals itself in those big pixels which conceal from the world the shame which was and is happening in these camps. Also – while many people were around on the days after the fire – most lately on September 24, people who tried to capture and report from the burned camp were sent away by the police or even taken to custody for some hours. Accordingly, one part of our political action was and has to be reporting on the situation and keeping it current in the public conscience.

The inappropriateness of Moria as a place of shelter for migrants reveals itself already at the very beginning: in 2014, Moria camp was constructed as a deportation prison and short term shelter for around 400 people. With the summer of migration in 2015, the camp was totally overcrowded so it extended to become a camp for migrants which was meant for around 3.000 people – already this number of people would have to live in terrible conditions without the possibility for privacy or isolation. By April 2016 – only a few months after becoming a migrant camp – already 4.000 people were forced to live there. So, after a few months the number of people climbed over the capacity which already left completely inadequate space for individuals. In March this year the numbers reached a high of about 20.000 people – seven times the capacity. With numbers so high, the so-called ‘jungle’ developed as people built up tents in the olive groves surrounding the camp. These tents didn’t protect the people at all and some even slept there without any shelter. 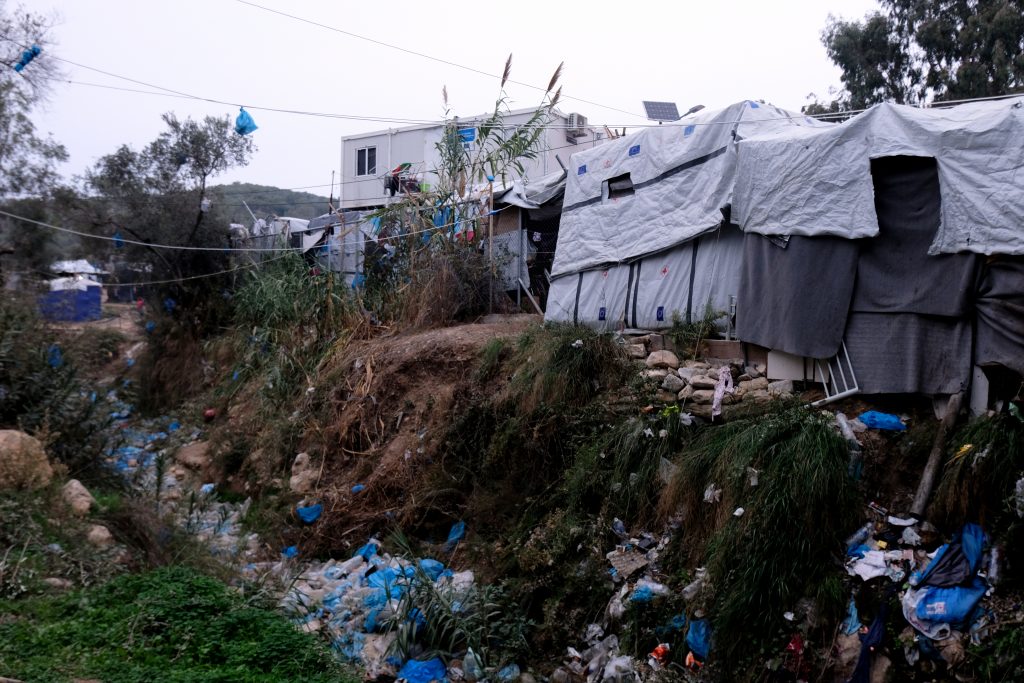 As the whole world was affected by new regulations around Coronavirus this year, so was Moria Camp. On March 22, 2020 the Greek government announced ‘restrictions of movement’ for the whole country of Greece. These regulations forced people to stay in their houses/ in the camp; to go ‘outside’ permission from the police was needed. From May these restrictions were weakened successively: from May 4 people were allowed to leave their houses without permission, on May 25 cafes and restaurants reopened, on June 1 schools reopened and on June 15 borders for international flights were opened again. Meanwhile, Moria camp stayed close. Instead of giving the same rights to the people in the camp as to everyone else, the restrictions of movement for Moria were extended nearly every two weeks. Migrants living in the camp were only allowed to leave for urgent reasons like appointments with a doctor, lawyer etc. It is obvious that the pandemic was and is a welcome excuse for the authorities to imprison people and to realize the idea of a closed camp step by step.

Also, migrants who  arrived on the island of Lesvos from March 2020 were put into so-called quarantine camps which were at the beginning just some tents on the beach and therefore called beach camps. In April a bigger quarantine camp in the region Megala Therma was set up – and of course all these camps were closed and the living conditions inside were horrible. Only one meal and water per day, no possibility for isolation, no doctors, no medication, no access to extra food – nothing! And even people who tested negative sometimes had to stay there more than two months before they were brought to Moria. These camps did not support or protect any migrant. They were – again – a means to oppress people, to control them and restrict their freedom of movement and autonomy.

The lockdown for Moria lasted until the camp burned down in September, it never officially ended. When the outbreak of Corona in Moria started and of course – due to the bad hygienic and medical standards in the camp – spread quite fast, there was no preparation for this situation at all. The camp was then quarantined, some people were tested, infected people were somehow isolated. On September 8, the day the fire started, there were already 35 confirmed cases – and still no appropriate plans and facilities for dealing with this situation in a responsible way. And for sure no opportunities for migrants to protect themselves from the virus and to maintain their physical and mental health. Who wonders that after all of this people got angry? Who would not? And who would not think about burning this whole place to the ground?

On September 3, 2020, the day after the first confirmed corona case in Moria camp, the Greek government announced it had signed an official contract for the construction of closed camps on Lesvos and Chios. The contract was with AKTOR SA, the biggest construction company in Greece, to ring-fence the camp in Moria and on Chios for €1.8 Million. The plan was to finish it within two months. If Moria would not have burned to the ground it would look like this now: a fence with 6 metres in two zones, biometric cards to control entry and exit, CCTV monitoring, airport-like bag screenings and a detention facility in each centre. The fence was planned to come with a moat, patrol squads and security zones. Still, the government rejects any comparison with prison. No one would have known what was happening  inside. The plan wasn’t made for the people, their health or their safety – although the contract was announced shortly after the first Covid case recorded in the camp and therefore used as an excuse to have a closed camp. The alternate minister for migration and asylum policy even said they have an additional important reason to better control the entrance and exit of the camps.

And there were other plans for fences, too. No matter the use, those in government try their best to think of any possible way to make it harder for people to reach the islands. In January the greek state wanted to set up floating fences. It was a ridiculous plan; to have a border of fence panels in the middle of the Aegean sea between Turkey and Lesvos. The only problem they saw was that these fences would have been a problem for other seatraffic, too. For the Greek state and the European Union, fences seem to be the only solution concerning migrants. We know that the only real solution is unconditional freedom of movement, overcoming all borders and abolishing all prisons.

At this point, it seems that some migrants took action and burned Moria camp down before it could become even more deeply controlled. They abolished the prison while the Greek state wanted to ring-fence it. We issue our support for these actions towards freedom and in our next text will try to detail the night that they took place; the night that Moria camp was burned to the ground. 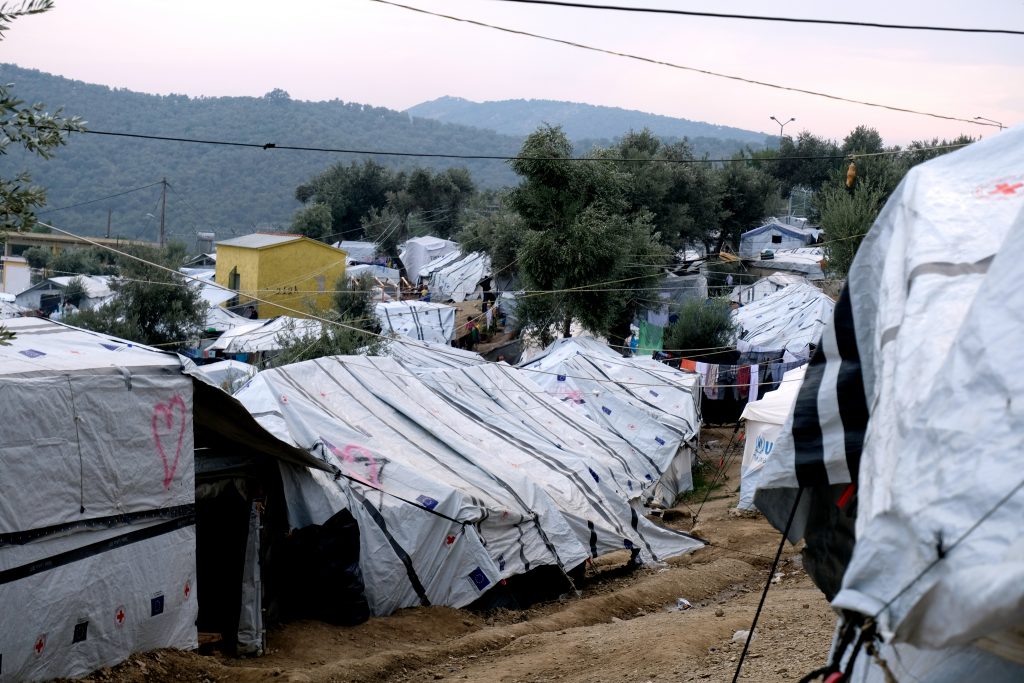