It does not take much examination to find that most of the NGOs on the island were paralyzed for at least some days following the fire. This happened for various reasons:  some just couldn’t reach their clients or their work was simply no longer a priority in the emrgency situation, others had to wait for new instructions from the executive level, some had to deal with positive Covid cases in their team, and others just decided right at the beginning to step out of the scene entirely until things were more stable again.

The problematic part of this is the fact that more than 9000 people were forced from their (meagre) shelter and living on the street at this moment. Certainly legal advice, education and leisure activities were not essential in this situation; food, water, clothes and medical care, on the other hand, were more essential than ever. Need for these became even more drastic when the area where the migrants had to live turned into an open air prison – with road blocks of police around, no opportunity to leave the area for shopping or searching for supplies in burned down Moria Camp, and less chance for solidarians to get inside the blockade.

So at the beginning there were only a handfull of self-organized groups or spontaneously set up teams who cooked as much as they could and distributed the food and water. The same happened with clothes and hygeine items. Luckily, because of their organizational structure, these groups were able to be reflexive and quickly respond to the dramatically altered facts on the ground. They also recieved a lot of support from NGO workers and volunteers whose normal work was put on hold.  The actions of NBK were possible because so many individuals from other organizations got involved.

But there was no medical support at all. For days the medical NGOs were waiting for a master plan from the Greek ministry of health: this means that, despite it being evident that people urgently required medical attention immediately, they were waiting for the government to tell them what to do and then to fullfill what actually had to be done by the government.  Acting like this as an NGO in a situation where medical support was vitally necessary was not only careless but also a highly questionable cooperation with the border regime itself.

After some days the situation changed a bit when some individual medics started to go into the blockade to take care of people and when Euro Relief started to distribute food from the military. About one week after the fire other NGOs also resumed their work. By this point distributing food, water and hygenic items as self-organized groups became more difficult as gaps in the blockade were filled in. 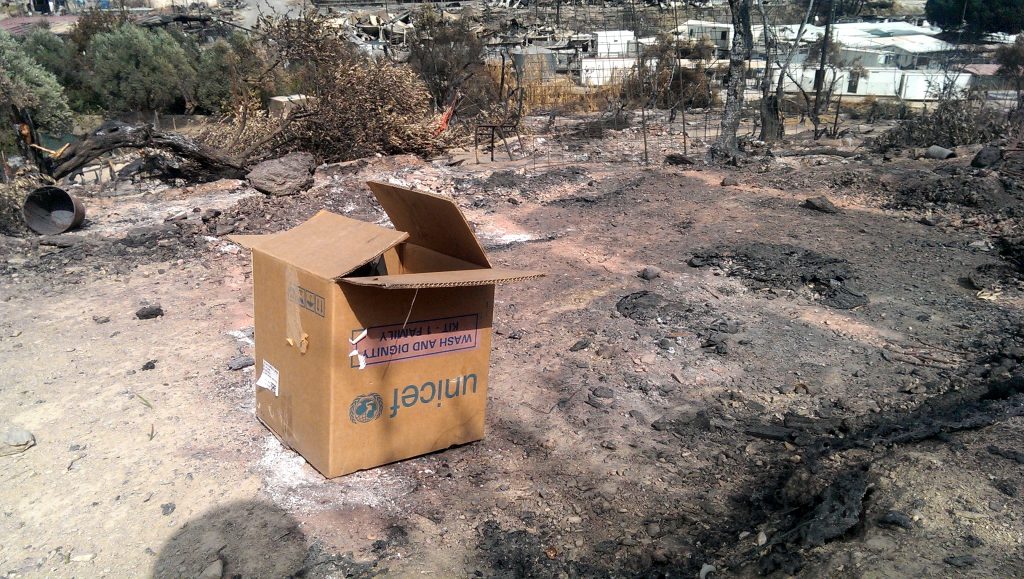 What was evident in all of this was the nonsensical nature of big hierarchical structures/ NGOs where people on the ground have to await orders from leadership abroad or from the state. Their structures simply made them ineffective in the aftermath of the fire. More worryingly, based on how they responded to this situation (and on much of their work in general), one has to wonder what the actual aims of many of the big NGOs really are.

Is their role just to supplement the oppressive state; to cease operations immediately when there is a rupture in the status quo and then to get back involved once return to status quo is clear? To ‘support’ people as long as they remain subordinate and then withdraw that support when people refuse their subordination? To stabilize the system but never to challenge it? Everyone who claims to be in solidarity with migrants and against the cruelty and violence of Fortress Europe ought to be concerned by the fact that, following the fire in Moria, the strategy of some of the most prominent NGOs on the island was basically to assist the state in locking people up in Moria 2.0.