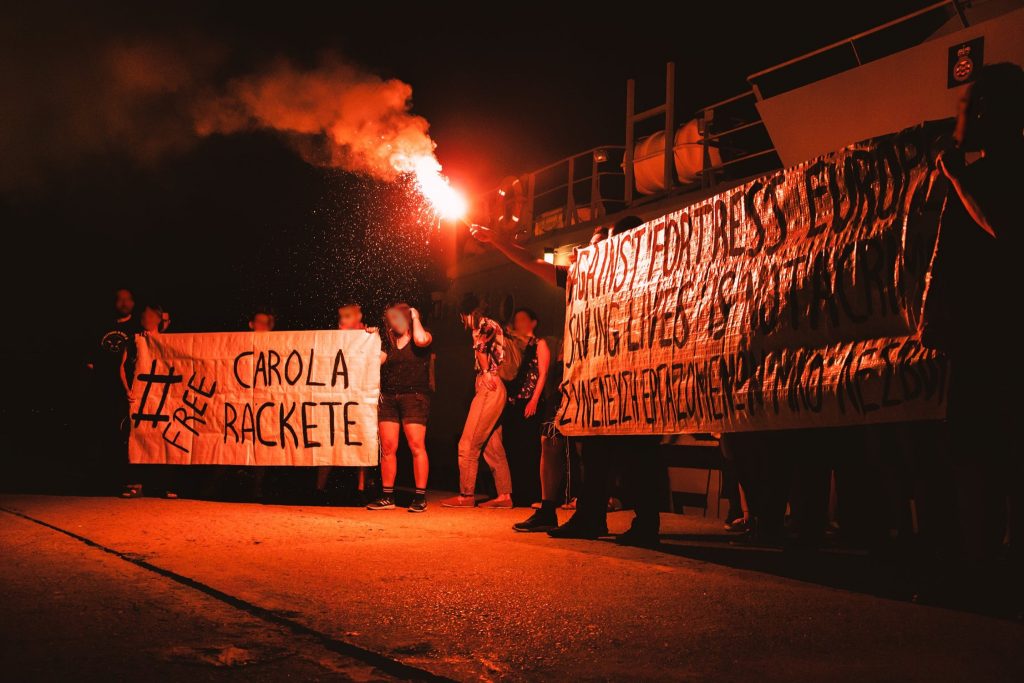 On 2nd of July evening, an assembly of about 75 people gathered in front of the Frontex vessel Valiant in the port of Mytilini and marching downtown.
With slogans and banners they demonstrated against the arrest of the Sea Watch Captain Carola Rackete and demanded her freedom.

We were relieved when we learned during the demonstration about her release. Still, the criminalization of sea rescue continues. Saving lives is a duty not a crime. The European Union dumps this duty to the so-called Libyan Coast guard, militia groups that either do not react on calls – leaving humans to drown – or brings the people back to a war-torn country where they face maltreatment and imprisonment or are sold on slave markets. In some cases, people returned are eventually killed, as yesterdays events show: At least forty migrants died and about 80 were injured through an airstrike on a detention camp in the outskirts of Tripoli. Since 2003, these detention centres are financially supported by the European Union and provided with material and have even been visited by an EU delegation.

While Carola is for now released from detention, the people who were on board of the Sea Watch 3 are not yet in safety and the Sea Watch 3 is still confiscated. Many other people involved in sea rescue are still facing trials: At the same time, the Juventa crew and captain Pia Klemm is brought before Italian courts for saving thousands of lives.

But it is not only white, European sea rescuers who face persecution. The criminalization and persecution of migrants who have less international visibility is even much worse. On the Greek Islands, people fleeing to Europe are arrested from rubber dinghies on a daily basis for no other reason than driving their own boat or calling for help in case of accidents. After months of pre-trial detention, in a farce of trial most of them are literally convicted for hundreds of years in prison, that they usually have to serve as a 25 or 10 years prison sentences. Their lives are apparently considered worthless, they are criminalized just because they were born in a non-European country.

The release of Carola is a great success against the EU policy of isolation, deliberate left-to-die policies and criminalization of solidarity, but no one is free, until everyone is free.

Stop criminalization of people who save lives!

Stop the criminalization of people saving their lives!