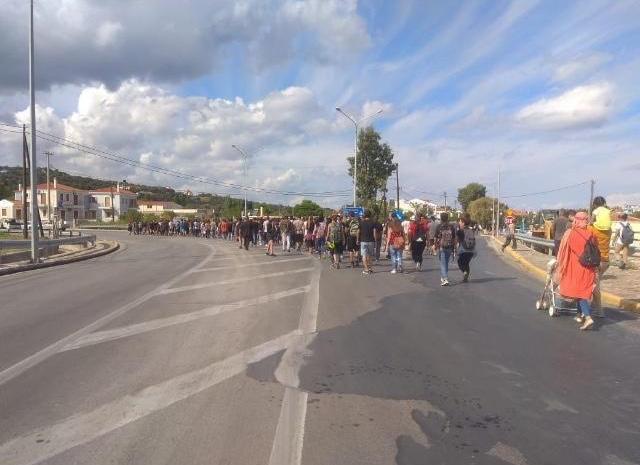 On Sunday 30th September this year, a fire broke out in a housing container in Moria camp, due to a short circuit. One or two people were killed as a result. The police attacked spontaneous protests in the camp with teargas, and didn’t hesitate to also shoot teargas in to the quiet living areas of the camp, and the densely populated olive grove.

In response, an antifascist demonstration took place on the next day, with about 200 people taking part. While slightly more than half of the participants were locals, the rest were migrants, among them some of those who have been trapped on the island for years, as it is common practice here. Before the demonstration, police tried to stop people from Moria taking part, by closing the gates of the camp.

The demonstration was held in the streets of Mytilini. The participants demanded the abolition of the camps, freedom of movement for every human being and the destruction of the fascist reality established, mainly, by the member states of the European Union.
After the demonstration a large number of participants gathered to discuss follow up protests.

In response to the police action of closing the camp and making it impossible for people to join the demonstration, a march was organised one week later. The route started at Sappho Square and ended at Moria camp, approximately 8 kilometres away. Under the midday sun, around 200 people took part, carrying the protest up towards the gates of the camp. With chants in Farsi, Greek and English the participants demanded freedom of movement, self-determination, and the abolition of the military-organised detention camps. At first, the police just followed the protest march without interfering. This changed when the demonstration left the busy main road towards Thermi, and turned into the smaller road to the camp. More than one kilometre away from the camp, the road was blocked by police chains which forced the demonstration to stop. It was declared that no further movement in the direction of the camp would be allowed. While calmly discussing how to respond to the cops, the protests blocked the street for about an hour. Afterwards the people decided to return to Mytilini. The march found an end at Ermou (the main shopping street in Mytilini) with a loud rally.

We hope the protests will not be discouraged or frustrated by repression or a lack of visible results, but will continue, and grow into a strong, united struggle.

Last week, once again, a trial based on empty accusations was held in the court of Mytilini. 13 people accused of occupying public spaces and resisting authority have been tried, two years after the events themselves.

In the autumn of 2017, police violently put an end to a six week occupation denouncing terrible conditions in Moria camp. The protestors were charged, in the face of excessive police action against them. Now, twelve have been deservedly acquitted of the charges brought against them by police, and the thirteenth given a three month sentence for resisting authority.

NBK supported the defendants two years ago at the protest, and also these last days with food during the preparation and on the day of the trial.

This trial, against people who protest against the inhumane living conditions and asylum procedure on the Aegean Islands, is no isolated case. Just last May there was a trial against 122 people, arrested on Saphus Square in April 2018, after severe attacks by fascists while police watched.

In both cases, after several hours of testifying in court, the court declared them innocent beyond all doubt. Once again the Greek police, their commanders, and their lines of action were not only left in question, but dragged completely though the mud. There are enough occasions already when their actions have been put into doubt by the courts.

In so many trials, it has been painfully obvious that the prosecutor and the police cannot present any valid evidence, that actually there is no case, that no one should have gone to court, that no one should have spent months in prison for their actions… That instead, the police should examine their actions in the face of these protests, which are protected by the Greek Constitution. That these actions ought to set off alarm bells, for the state and whole society.

We denounce the habitual actions of the police towards these people who protest against their treatment by the authorities. We can recall so much repression against protests in Moria. We do not recall any actions in their favour or even in their defence, only actions against the protesters.

This comes as no surprise, when the police (already a repressive body, defending the interests of the established power and not of the people who suffer from it) are infiltrated by Nazis, which happens not only in Greece, but in many European states now. It follows that this repression, even in the face of peaceful protests, is what people face day to day in Lesvos and in other islands of the Aegean Sea.

We do not resign ourselves to accept as everyday the habitual criminalization of protests and solidarity, the persecution of migrants who seek refuge and are protesting for their rights in a dehumanizing context, and the persecution of people in solidarity. We will continue to fight against these actions, and denounce the savage repression.

We know that all this is being ‘normalized’ in the subconsciousness of many people, here and in the whole of Europe. We know that these actions have the protection of the European Union’s rules, regulations and course of action on migration. We know that European right-wing, far-right, fascist and Nazi groups (acting from political parties, military, police, paramilitary and parapolice corps) take advantage of these ideological lines marked in pursuit of security (a security for hetero-patriarchal capitalism, not for us) to attack the different and the dissidents.

We will not stop denouncing this criminalization and shouting to the citizens of Europe, to wake up and rise up against oppression.
To fight to resist current European political lines, to respect all people and protect everyone’s dignity and freedom.

Stop show trials!
Close all hotspots!
No human is illegal!
Open The Borders!