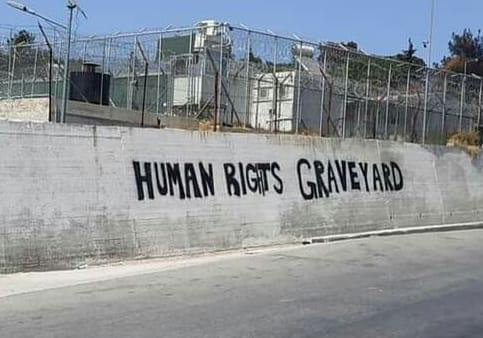 It has been a few days since the “New Pact on migration and asylum” was announced by the European commission.
The key points? Increase in deportations and decrease in respecting the even most basic human rights of asylum seekers. It will make access to fair asylum procedures even more impossible for many. It will potentially replicate the EU-Turkey Deal to other countries.

While presented as “a fresh start”, many things in the pact are unfortunately all too well known already for people here on Lesvos. Being on Lesvos, it seems they have taken everything that’s bad and broken here and tried to transfer it to an institutional European Level to ensure suffering for all who attempt to get to Europe.

“No more Moria” they promised but simultaniously, in true doublespeak fashion, make it clear that at the same time what they are aiming for is in fact not Moria, but something far worse. They intend to strip asylum seekers of all of their self determination and rights to a fair procedure. No more Moria not because Moria was a human rights violation but because people were still too “free”, by their standards. No more Moria’s but more prisons. No More moria but more and faster deportation. No more Moria, but more electronic surveillance, security checks and identity verification. No more Moria but more suffering and death.

In their proposal released on the 23.09 the European commission presents their plans to establish pre-entry screenings and border procedures for all asylum seekers that come irregularly through a external border. People from a country with less than 20% acceptance rate will be detained, entered into a fast tracked procedure and returned.
On Lesvos, detention upon arrival based on nationality and fast track procedures have already started a while ago and been gradually intensified until this day. We can see the consequences – people not having access to fair procedures, not having access to any legal support and prolonged periods in prison – from arrival until deportation. This is not just problematic in a legal sense but had very direct, dire consequences for the affected people. While European commission promises more fair and transparent procedures we clearly see the exact opposite. People are being rejected without even knowing how the asylum procedure works. Not to speak of their rights in the procedure. This takes a huge toll on their mental health. As has been seen very sadly on Lesvos, detention (upon arrival) creates severe misery – and endangers the life of the detainees.

Also the Commission praises the EU Turkey Deal and promises more “continued and sustained EU funding” for Turkey. A lot has been written about this Deal – and we do not have to repat that giving money to Erdogan in order for him to commit human rights breaches towards refugees for the EU is utterly unacceptable. To repeat this with other actors as the EU “promises” gives us sleepless nights.

We are scared in of the future this new pact will bring. While we are still unsure how exactly it will be implemented one thing is sure – it will be a nightmare. 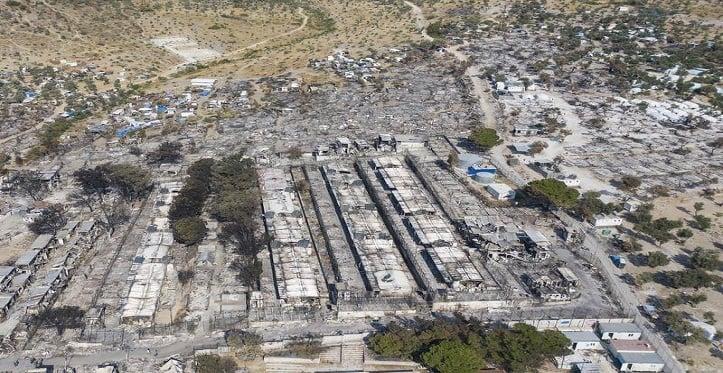 The new camp is expanding every day. The authorities publish orwellian statements to force people to go inside the new structure. As the new fences arise, the crimininalisation of solidarity continues. The authorities have released a slew of statements that imply that solidarity workers are “using and exploiting migrants for their own interest”. For some years, and not only in Greece, conservative and outright racist political parties, groups and newssources have been using this narritive, with high succes. As the populace votes, political parties use their position to turn this narritive into law and practice.

As people are seduced, forced and blackmailed to go into the new camp, the goverment of greece does its best to not only ensnare their voter base with populist rhetoric, but also convince the migrants to act against their own best interest. Most of the tents in the camp are incomplete, providing only shelter against the sun. But with the autumn on the way accompanied by heavy wind and rain, this is not enough. There is not enough food and water, it is given out only once a day. Once again there are long lines. There are not enough water points. Social distancing is impossible. There is no proper medical care. People’s movement is once again constricted. The authorities, the greek goverment and the european union are conspiering to cover up that they are rebuilding Moria, and continuing the dehumanizing and racist policies. And when the twenty four hour news cycle lose interest in the people trapped on this Island it will be business as usual. 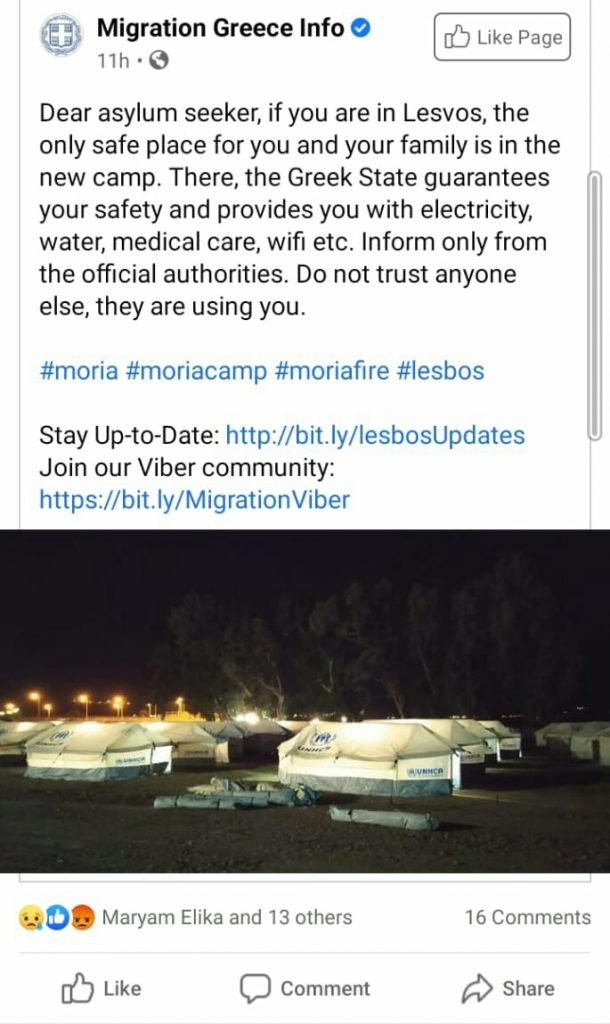 “The greek state guarantees your safety”. .

“Do not trust anybody else, they are using you”.

The greek goverment is trying to insinuate that the people in Moria have been “tricked” into starting the fires by evil ngo’s with misinformation about the sitution they are in. This racist narrative implies that people of colour would not have taken action against the injustices and violence perpetrated on them without white people to “guide” them. The situation in Moria has been well known for many years. And so where the countless demonstrations inside and outside of Moria organised and attended by migrants over the last 5 years.
The greek goverment telling people that they will ensure their safety is a cruel, sad joke. While the demonstations in europe for the evacuations of the people formely cought in the camp are ongoing, the new prison will take it’s place. A prison where people will be once again forced to live in horribly conditions under the watchful eye of the greek police. But, the politicians of europe can go to sleep easy, as the unwanted immigrants are locked up once again.

Four days ago the camp in Moria started to burn. Unlike conservative mainstream media we do not care about how the fire broke out or who started it. One thing is clear to us: every person, who has had to live under repression for months and years, who is forced to live in inhuman conditions and who does not have any chance to set up a self-determined life because of racist structures, has the right to fight against this oppression by any means necessary.

From the beginning Moria camp was (intentionally) inhumane and it got worse and worse. The camp, the surrounding olive groves and actually the whole of Lesvos is one big open-air-prison for migrants. Coronavirus only worsened conditions. Some people were allowed to leave the island but were forced into illegality in Athens. Last week, the inevitable first Covid case was recorded in the camp and more followed. Even without the virus the camp was unbearable. So there was bound to be resistance.

It began with young people, who did not want to be imprisoned with Coronavirus, or to be even more controlled in the name of preventing its spread. They began a revolt against the police. When parts of the olive groves around the camp – where people live in tents, self-built shelters, or without any shelter – started to burn, police did not care at all. Not until the agency that organises “voluntary deportation” was attacked did they react. And their reaction was typical: tear gas. Not until the whole camp was on fire were migrants allowed to move. But not even then they were allowed to move to the next city. They are stuck in between the village and the city now, with police blockading them on all sides.

In addition to the police, fascists – just like they did in March – have begun to aggressively follow, intimidate and harass migrants and solidarity workers. They are patrolling the city and surrounding area on motorcycles. While cars attempting to deliver food and water are held up and often turned away from police checkpoints, fascists cruise right through, demonstrating with whom the cops are aligned.

From photos and videos the dimension of the catastrophe can be seen. But many people are still missing and cannot be found since no one knows where they fled. Many have had little or no food or water for days at this point. The Greek state reacts as usual: a state of emergency declared in Lesvos for four months which means more police and border police on the island. Not only more police, but also immediately two military camps were found and proposed as suitable locations to set up new temporary camps. We have heard that some migrants have already been taken there, while fascists are gathering closeby. People we’ve spoken there reported that they are not allowed to leave. Is this already further movement towards the new closed camps?

So if anybody was hoping that because of the fire there may have been some political decisions that improve the migrants’ situation, you have misplaced your hope. We find hope instead in how Moria residents continue to refuse the subordination and discipline the camp is meant to accomplish, and to defiantly imagine a better life for themselves. A new camp is no solution: the only solution is freedom to move for all. 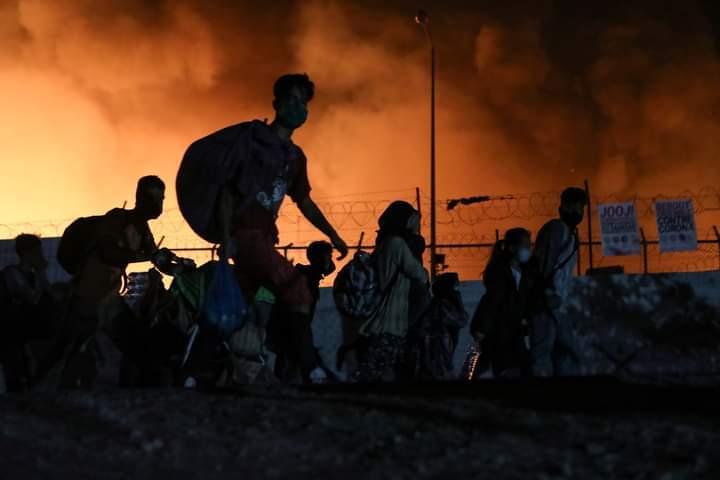