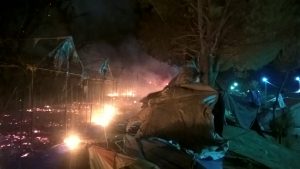 The night from Monday to Tuesday was very rough for all of us. Monday started with a very big and powerful protest for freedom and against the unbearable living conditions in Moria from the people in the camp. In the evening the situation in the camp escalated and Moria camp took fire. At nightfall the fire was extinguished but most of the tents and the family compounds were already burnt down. Thus thousands of people including many families were left in the dark without a sleeping place, water, food or blankets. Meanwhile the police blocked the road to Moria camp forcing people fleeing the burnt down camp back. To Moria the only other road from the camp to Mytilini through Moria village was blocked by a racist mob and several people were attacked. In this night we and friends were supporting people with our solidarity and necessities like water and blankets.

With double the refugees living in Moria than it was initially built for, Moria camp is completely overcrowded. The people are forced to stay in overcrowded tents or outside, there is not enough food or water and very bad hygienic conditions.
On the day the fire broke out, September 19th, there had been no lunch and the water had as usually been cut for hours. Some refugees started protesting and some managed to set their imprisoned friends free. They protested in front of the EASO offices to ask for their asylum requests to be processed and to demand answers about the reasons for their deportation. The EASO staff left the camp from a back door without responding. At that point the peoples anger grew, they gathered in front of the camp in protest and in the spirit of the recent demonstrations, started marching towards Mytilini town.

There are a lot of stories of what actually happened on Monday. Some say the people wanted to march to Mytilini town to protest against the border and Moria camp, others said that they heard about the fascist gathering in Moria village and wanted to make a counter demonstration. No matter what is true, it was a common protest of people from different origins and language groups together against the borders, the bad conditions in Moria camp and fascism and racism in Lesvos. It is unclear whether they were stopped by the police or if or they returned voluntarily, but the people turned around and went again to Moria camp. In any case anger grew even more and soon people started clashing with the police.

During the fighting a fire started spreading through the camp. It is unclear who set the fire, but as far as we know the flames started in the dry fields outside Moria camp close to one of the unofficial entries to the camp and because of the strong wind quickly expanded inside the camp. In Moria camp all constructions and the tents are made of easily inflammable material so together with the piles of trash lying around in the camp everything took fire. Fortunately no person got seriously injured in the flames but the firefighters didn’t reach the camp in time to save the belongings of the people. Hundreds of people lost all they had but what they were wearing at the time of the fire: passports, documents they need for their asylum process, diplomas, money, clothes, tents, sleeping bags – all gone.

Instead of getting shelter and new blankets the people were confronted with the police and the locals blocking their way out.
The main road was closed by police buses not letting any refugees out or any other people in.
Meanwhile a big group of racists reached Moria village. Previously they had marched in Mytilini town for a nationalistic demonstration against Moria camp and refugees on Lesvos. They also already attacked and beaten two girls on the same day, from who one was hospitalized. The mob in Moria village consisted of at least 100-200 people armed with sticks and knifes. At this point we don’t know if it was mainly locals or also organized fascists from other cities. We were told of refugees defending themselves with stones against the fascists. Only a handful of police men held the locals back from beating up the refugees trying to get through to Mytilini. Some of us from No Border Kitchen tried to get friends and families out of Moria camp to a safe place. On our way by foot through Moria village we also were attacked and threatened with a knife. Also one of our cars got broken with an ax while the person inside was insulted and threatened to be beaten up. Luckily we run respectively drove away fast enough not to get physically injured.

Now the future is unclear. While there is still a need for emergency help, for the rebuilding of shelters and distributions of clothes, water and food, the actual problems didn’t change. Moria is not a refuge and forcing people to claim asylum in Lesvos not a solution. Even if Moria is in the process of being rebuild, it will just become again the unlivable place it was before the fire. Also still people are arriving and the situation in Moria will continue to get worse. But even building a second camp like Moria as planned by the government is not a solution.
We from No Border Kitchen are working hard at the moment to support the people from Moria. But we don’t only distribute blankets. We will also go on to show our solidarity and our protest on the street. We stand with all the people that were fighting the inhuman conditions in Moria on Monday and everybody that suffered under the fire on Monday.

We want to be known that the fire in Moria was not just an accident. And the fight was not just a food fight. People were fighting for their rights to be treated like the human beings they are. Furthermore it is out of question who has to take the responsibility for the fire in Moria. Its the people that close the border, the people that force people into overcrowded camps build from plastic and lacking even water or food. Camps that lack conditions suitable for human beings will always be a source of fire. 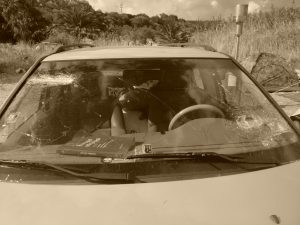 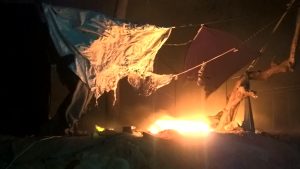 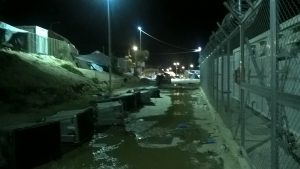 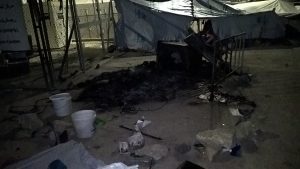 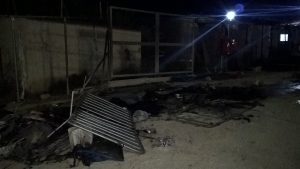