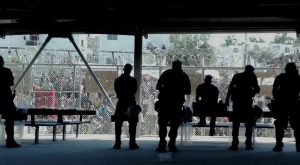 I was at the EASO office, and EASO for those who do not know is the most amazing office you can ever visit: European Asylum Support Organization. Suddenly, a very dangerous thing happened: a peaceful demonstration erupted.

When I first heard about EASO I had that feeling that someone really cares about me as a refugee. That someone is supporting me in my asylum process. That is why I decided to visit these amazing people, located in the middle of Moria hotel.

Some would like to call Moria a refugee camp. However, for me it is a five star hotel: You get everything for free: Police attention and care, security guards everywhere and military vehicles: All for your personal care, they are watching you closely like a father. In Moria you also get a free Sauna when it is 40 Celsius outside, some people will be paying for going to a beach or sitting at their own apartment or hotel under the air-conditioner unprotected and with no guards, but in Moria you, as an honourable refugee, will be sitting in your own tent, enjoying the free sauna, protected by police and other security guards. Moria is also a time machine: you get rid of the modern world and you get back to the jungle as there is no presence of law, and it is all for your benefit to gain experience.

So as I was saying, I decided to visit these amazing special creatures at the EASO office in Moria hotel. When I first arrived, I saw fences covering the office, police and private security guards were double the number of refugees they are serving. It is reasonable as each refugee will get two guards, not because he is a threat of course, but because they want to ensure the refugee’s safety and care.

These guards were lovely people, it is true that for many that they view the guards as angry nervous human beings. For me it was obvious that they, unfortunately, are unable to express their true emotions, but their energy is full of love and care, you can feel it when they look deep at you, when they are searching you, when they stand beside you, they want always to make sure that there is no explosive materials in or around you: of course not because you, as a refugee initially decided to bring them, but maybe someone put them in your pocket.. You know it happens..

While I was happily looking at that beautiful place, I was hearing the stories of people who spent months and years without any progress on their asylum process: EASO feels like a mother who does not want her children to get away to another country. Some people will call it a trap, I would prefer to call it extra care. Maybe we need a family therapist here.

I was enjoying hearing the experiences of these people, knowing that I may be also overwhelmed by the trapping love of EASO, a dangerous thing happened suddenly; A group of about forty refugees (not just refugees, but also human beings.. can you imagine?!) acted so dangerously: They started to chant Freedom and Liberte while peacefully walking in the camp!

How did I know that it was a dangerous act? Because the lovely police started to quickly and nervously move to protect us from behind the fences. The guards felt really sexy and strong with all of these Hollywood moves *powpow*, just saying.

It is really dangerous to see people demanding their Freedom after being trapped here for months. They are traitors to the love of EU authorities, seriously. The EU has been providing them with five star accommodation, food, water, protection, sauna etc and the option to voluntarily go back to their home countries. You know, these people came here for a lovely vacation, and maybe when they finish they can go back to their safe countries. It makes sense.

After all of that they will say they are angry?! And what do they want.. Freedom! Why freedom motherfu*****! We just want you to stay with us more, we don’t want to lose you to another EU country, we feel jealous if you were relocated in EU!

Then I noticed that it is not just the sexy guards who were nervous, but also the lovely EASO employees who hide themselves in their offices and started to take sneaky looks at the peaceful protest from inside the office, behind the guards and the fences.

I felt that I would have an heart attack, it must be so hard to imagine how dangerous it is, forty refugees (and also human beings, again!) demanding their right to be free.

And then I felt calm… It felt like home! In Syria when some crazy dangerous peaceful demonstrators demanded Freedom, they were considered as a threat to the Assad state, that is why Assad, to protect the rest of the country from the threat of Freedom, decided to gently act against this threat. Some people would say that Assad destroyed Syria, he was strict, just saying.

So as I am telling you, I felt comfortable, I felt home again. Crazy dangerous people chanting peacefully Freedom & Liberte, but on the other hand there are these honest guards protecting the rest from the infection of their voices.

While all of that was happening, I saw a little child crying, she was very nervous, maybe she, like me also trusts the authorities, so she felt afraid of the peaceful protest when she saw the guards moving firmly and quickly from one corner to another behind the fences. I looked around me trying to find the superman who will come from the employees or guards to get the little girl inside one of these offices, but the superman did not appear. I mean… I trust the guards and employees, I knew they had their own reasons why they were not inviting a little girl to one of the offices where they were protecting themselves. I mean, why do they not hide us among them? Because now I am so afraid of what is going on.

I stood up and went to ask one  of the employees (because the guards were really busy doing their flexible sexy movements from behind the fences). I just wanted to know if this place is supposed to protect refugees, why don’t you invite us to hide from the dangerous demonstration! When I heard one Greek independent lawyer and one refugee whispering; freedom, and one refugee smiling at him!

Oh… It’s the fu***** infection! We are also dangerous, because we may also chant “Freedom”!

Our friend Zaid, an expert refugee.

** Thirty-five refugees were arrested later that day and are facing up to 10 years in jail. For more information about Moria 35: