A few days ago we finally found a place for our kitchen! We moved around a lot in the last two weeks and are super happy to have a stable place again for cooking. After the conflicts in the days before that we had a lot of meetings and discussions. Finally it was decided to separate the kitchen from the Social Center building. Also we were asked to support the people more in cooking for themselves instead of serving ready food. So now its food boxes for cooking instead of cups of ready food.

We are cooking everyday now in the new kitchen and distributing the bigger part on Tsamakia beach and a smaller part we bring to the people in the squats around the old Social Center.

Apart from all the moving and cleaning of the new place we had nice, quiet and sunny days.

Check out our new kitchen: 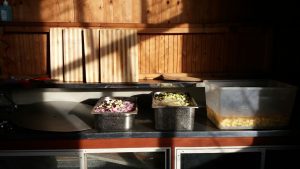 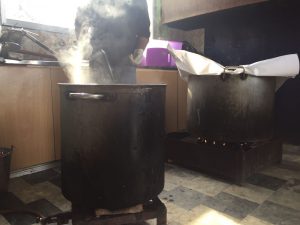 Also a NGO called swisscross started cleaning up in the squats, getting rid of all the junk that the owners of the old warehouse left inside when leaving the place and therefore making the place more liveable.

But as always there is also shit going on here…in the last days the police was rounding up people from Pakistan and Bangladesh. A lot of people were picked up by the cops in the street, taken to Moria and the people that didn’t do it before were forced to give their fingerprints and apply for asylum. Most of their cases will be rejected quickly and then they will be deported back to Turkey. Already today morning around 60-70 people were deported to Turkey, as far as we know mostly from Pakistan and Bangladesh. We are angry and sad about this and fear for the safety of our friends and comrades from this two countries here on the island.

We said it many times before but it seems that it cannot be said often enough: Turkey is not safe. It’s not safe for any asylum seeker. In Turkey there is on the one hand no proper support of asylum seekers or even access to a asylum system. All non-syrian asylum seekeres are detained in so called “repatriation-centers” without access to medical care, education or legal assistance. Most non-syrian will be deported back to their countries, where many face persecution. Syrians might be given some kind of protective status but then are still without access to basic support like medical care and often forced to work in exploitative conditions. On the other hand we also continue to hear stories from brutal violence against refugees and migrants in Turkey by the hand of the police.

As always we will still stay here, we will support our friends in the squats and camps and we will now and forever say

No one is illegal!