Two brothers from Nigeria who made the deadly crossing from Turkey to Lesvos in a rubber dinghy were immediately detained in the pre-removal prison inside the so-called “Hotspot camp”, Moria. For almost three months they were isolated from society, adequate legal assistance or support structures. All refugees from countries with less than 33% acceptance rate (which are more than 28 countries including Syrian single men) can currently be detained immediately after their arrival on Lesvos, for the entire duration of their asylum procedure. While the two brothers were held in detention, their asylum application was rejected twice under the fast-track border procedure implemented on the Greek islands since the EU-Turkey statement of March 18th 2016. It has been repeatedly pointed out by the European Center for Constitutional and Human Rights and lawyers such as those from the Legal Centre Lesbos that the fast-track procedure tramples roughshod over human rights. In practice, individuals are targeted because of their nationality and stripped of their legal right to a fair and proper asylum hearing.

Together with eight fellow detainees, the two brothers were deported back to Turkey on November 30th by ferry from Mytilene. They only experienced Europe from behind the barbed wire and blank walls of a detention centre, guarded by policemen subject to a constant feeling of isolation and suffering inhuman treatment.

“The conditions in the closed Section B of Moria Centre [are] particularly poor and could be considered as inhuman and degrading,” one Council of Europe researcher reported.

Inmates are stripped of their personal possessions, denied blankets and often live among flooded sewage. Some can only be seen by a doctor at the discretion of the prison guards.

Thanks to these conditions and a lack of medical support, one of the brothers got seriously sick. A video of his deportation shows that he was not even able to walk on his own when he was brought handcuffed on the ferry. Obviously, this condition was no reason for FRONTEX and the Police to postpone his deportation – as we have seen in several similar incidents across recent months.

In Turkey, the two brothers will be detained in prison for an unknown period of time under even more inhumane conditions. By law they can be detained up to one year. Experiencing racism as a person of colour will be a cruel inevitability. One brother said: “It’s even better to be in prison in Greece, then to go back to Turkey.”

Many of the people who are deported from Greece to Turkey will, after the detention period, eventually be deported once again to home countries that they fled due to persecution in the first place.. The story of the two brothers is just one example out of thousands, as people flee suffering only to face the brutal detention and deportation politics of this so-called bastion of human rights, the European Union. 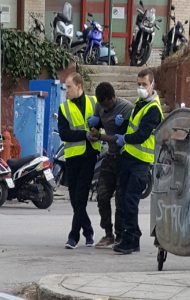