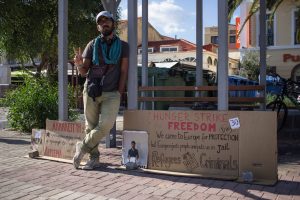 When there is a person, or even more, dying in front of your eyes, what do you do?
Some people suggest to help immediately but only as far as you don’t put yourself at risk.
Others say: Help, no matter about yourself
Again others would do a calculation about which act in the end helps the most people, even if some other lives are wasted for that.
So you see, there are some possibilities, how to act.

So let’s see, which possibility the UN, the EU and the Greek authorities pick, when they have dying people in front of their eyes:
None. They do exactly nothing.

Be it people drowning in the Mediterranean or the newest example of this fucked up ignorance:
Letting people starve to death.

Amir Hampay, Bahrooz Arash and Kozhin Hussein have been hunger striking in Moria’s section B (the detention center) since the 27th June 2017.
Now you might argue that they are not really visible, as they are put behind bars.
But then there is Amir’s brother Arash, sitting in the main square of Mytillini, joining their hunger strike one day after they started it in order to make it more visible.
So this excuse doesn’t count.
But maybe they are bad people, so they deserve to be in prison, others may ask.
Well, if you think it is right to put people in prison, because they fled their homes and were forced to leave their families and friends because of war, poverty, oppression or persecution, then you might find it reasonable, but then you are also a huge asshole.

So, back to the main topic, the hunger strikers in Section B were taken to hospital only tree times in the last month to check up on their health.
Also, and thats crazy, no one is allowed to bring them salt or sugar to add to their water, so they don’t die. When Arash was in hunger strike in Iranian prison, where he was tortured and imprisoned because he (like his brother Amir) were Human Rights Activists, friends and family were allowed to bring him salt and sugar.
You see: Iran –> salt and sugar; EU→ no salt and sugar
So the European Union, that likes to put the crown of Human rights on its head, treats hunger strikers worse than the repressive Iranian regime. Congratulations!

But we have one good news: Last Friday Amir Hampay was released from Moria prison, where he had spent more than three months because he dared to ask for asylum in Greece, which was not accepted, even though he has exactly the same case as his brother Arash, whose Asylum claim was approved. Greek authorities went so far to try to deport him to Turkey, a country of whom themselves said that its not safe for him. Congratulation again!
Luckily this illegal deportation could be stopped.

Sad news is that the other two imprisoned hunger strikers still are not released.
After one month of hunger strike we expect their health situation to be really bad.
But we can’t say how bad exactly because Bahrooz and Khozin are, like all other detainees in section B, only allowed to check their phones for 5 – 60 minutes a day.

They need to be released from detention!
Otherwise they will die.
And afterwards you can’t say, you didn’t know whats going on!