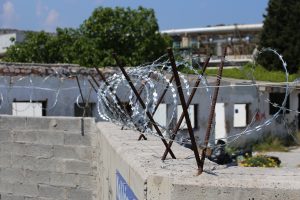 The No Borders squat in Lesvos was evicted five weeks ago, and it feels like we’re losing more space every day. It’s been a month of harsh police crackdowns on squatting and rough sleeping, vicious and increasingly frequent deportations, and dwindling financial support. The EU is funnelling the thousands of refugees here into Moria detention centre, deporting them to face persecution and death abroad and washing its blood-stained hands of the whole affair.

No Borders Kitchen are still here, still fighting and still providing food, care and legal support to hundreds of refugees, but our work is more difficult than ever before. Here’s how the situation has deteriorated for the roughly 4000 refugees trapped on Lesvos, how No Borders is struggling to respond, and what you can do to help out.

As the time refugees are trapped here lengthens, the island grows smaller and smaller. There is little to do each day but trudge to Moria to hear that no progress has been made on your case, fight over cooking oil, and skim stones into the Aegean Sea. People are making increasingly desperate attempts to escape Lesvos – the ‘beautiful prison’, as one refugee recently described it. Earlier this month, one young man attempted suicide in Moria’s Section B detention centre, stabbing himself in the chest with a switchblade. He remains incarcerated.

It is easy to think of time as standing still, but actually it is sliding away: people have been waiting for 9, 12, 18 months as interview dates are bungled, translators cannot be found, and the broken assessment system grinds slowly on. These months are taken off young lives, eating into education and careers among much else, and cannot be bought back at any cost.

There are months and months of nothing, and suddenly there is no time at all. Once an asylum appli 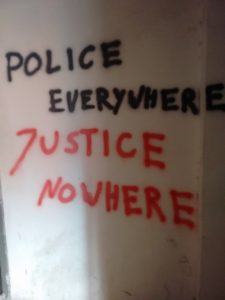 cation fails, as over 90 per cent eventually do, refugees have five days to lodge an appeal before deportation. Many are not told they have this right and so are deported when they still stand a chance of securing asylum. Some physically sick refugees and others with the legal right to remain have been pulled off the deportation ferry by lawyers: others are illegally kicked out ahead of time. Friends of ours awaiting deportation in Section B are shivering with sickness, while others are covered in historic torture wounds and recent self-harm scars. If they are not stopped, these deportations will kill.

Deportees are taken from Moria to the port under cover of darkness, but deported under the cover of tourist-trap sunlight. Handcuffed and stripped of their mobile phones, they are muscled onto private ferries, and the holiday-makers around the harbour never realise human rights are being infringed 20 yards from their cocktail bars. Official figures show 129 deportations under the EU-Turkey deal from Lesvos since the start of April. And as the EU is finally clearing its backlog of stranded refugees – by deporting the overwhelming majority – we expect a severe increase in arrests, detention, and associated police violence.

Some deportees attempt a return as soon as they escape detention abroad – “until they die they will never stop coming back,” one Pakistani refugee recently said. Many take the suicidal Libyan route, through waters where an EU-trained coastguard sprays bullets at drowning toddlers and deaths are so common as to seldom make the news.

Giving up any hope of claiming asylum, those opting for so-called ‘voluntary return’ are bribed and coerced into returning to life-threatening danger in their home countries. Following a lengthy jail spell in Athens, they are imprisoned for months in Pakistan or Afghanistan, until a family member can bribe an official to have them released. For families who spent all they had to send one child to the imagined safety of Europe, this is often impossible, while violence, abuse and suicide are of course rampant in these prisons as well.

Every time we walk the long, hot coastal road from the city centre to Moria, we pass the mocking empty space of the old No Borders squat, still daubed with anti-patriarchy graffiti but now ringed with razor wire and under 24-hour security surveilla 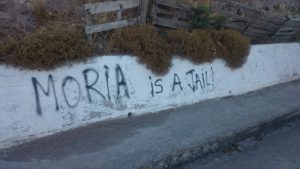 nce. Scores of refugees and activists ate, slept and lived together here in shared struggle.

The squat’s eviction closure makes it hard to even meet with our refugee friends, let alone  support them in resisting deportation. For the crime of sheltering in a derelict building, refugees have been hit with heavy legal fees and court cases which will badly affect their asylum claims. Some former squatters now sleep on the beach or in the woods, and some have returned to Moria. Others have opted for voluntary return, preferring an unknown prison sentence to the certitude of sectarian violence in the prison camp.

The remaining squats are increasingly violent and volatile. Friends of ours have been beaten, robbed of their mobile phones, and extorted for the safe return of sim cards containing their only contacts to their families back home. These squats also face imminent eviction: a derelict white building we called ‘Casablanca’ was forcibly cleared out, and all its occupants detained or charged with squatting, just two days ago.

Pending court cases, combined with the police’s increasingly violent and zero-tolerance approach to squatting, mean we cannot find a new space to live together. While we continue to find shelter for the most vulnerable, we are forced to tell many refugees in desperate need of shelter that we can no longer keep them warm and safe overnight.

Food is the focus of our practical support. Each week we provide up to 300 refugees with all the ingredients they need to cook for themselves and subsist autonomously, packing up boxes in an abandoned strip club and distributing them in squats and parking lots around the island. 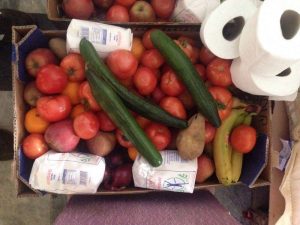 Every month we distribute over 1500kg each of flour and rice, 800kg of potatoes, and hundreds of kilogrammes of fresh fruit and vegetables, lentils and pasta, plus spices, tea, coffee, cooking oil and toiletries. We receive more requests for boxes daily, and are currently forced to turn families away due to a lack of funds. Each day, we provide a hot meal to around 60 refugees, catering for those unable to cook for themselves and creating a small ad-hoc social space, and have recently started meeting for tea, coffee and hot food withrefugees living in Moria. We also feed desperately impoverished Roma families, marginalised and persecuted here since before a single refugee arrived.

Drawing on our network of contacts across the island, in Moria and in detention, we are now offering material support and legal assistance to detained refugees. All deportations are cruel, violent and illegitimate, but many are also illegal, and we are working alongside lawyers and refugee activists to save people from forcible transfer to Turkey. All our work enables us to stand in close, personal solidarity with our refugee friends, particularly those shut out of the asylum system and failed by the big NGOs, and support them in their struggle for asylum and dignity in countless different ways every day.

Many more refugees will arrive in Lesvos over the coming summer months, as people-smugglers take advantage of the clear nights and heavy maritime traffic. 16 people recently drowned offshore, while four boats containing hundreds of refugees made land just this weekend. Since the EU-Turkey deal began on 18 March 2016, the number of migrants stranded in Greece has actually increased by 45%. Thousands of new arrivals are currently being dispatched by Turkish smugglers to nearby Chios, and many will be transferred here for detention and deportation.

As the tourism season comes around, Frontex will prevent the ugly sight of refugees washing up on golden beaches by intercepting them in dangerous deep water, and the police will come down even harder on paperless refugees sleeping rough among the olive groves and cobbled streets of Mytilene. The EU is trying to squeeze these refugees out of existence, but we are determined to give them room to breathe, and the best chance possible of continuing onward to a better life.

€20 will feed one refugee for a month

and $2000 per month will provide food boxes for the roughly 100 refugees on our waiting list, currently left hungry because we can’t afford to feed them

If you are able to donate any amount to support our work, please email noborderkitchen(at)riseup.net, message our Facebook page or contact us via telephone or Whatsapp. We also accept credit at local food wholesalers and donations via Just People, a partner organisation based in the Netherlands:

Please also get in touch if you would like to work alongside us in Lesvos. We are particularly looking for longer-term activists who share our political principles, and drivers with cars.

With love, rage and solidarity always

Your No Borders Kitchen crew 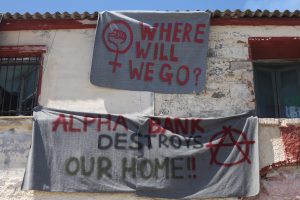