It is blooming everywhere on the island and the warm sun is back. The situation here for most refugees continuous getting worse though.

Still there are continuously people arrested and imprisoned. Mostly it is people from four countries: Pakistan, Bangladesh, Marroco, Algeria. Police is targeting these nationalities for their low chances of getting asylum. People continue to have to fear to walk to the city to use the internet or have a coffee, fear to walk to Moria camp to renew their papers or get their cash card.

Moria camp is more and more constructed like a prison…even more than before. While the EU celebrates itself for providing winterproof shelters (in March after the cold is over anyways….) it is clear that they don’t do it to improve the well being of the people in the camp. Much more it is another way of control. Moria is now structured into different sections that are mostly made up by containers. Access is only possible for people living in the section and only with a wristband they have to wear.

As the repression got worse a task that gained more and more importance in the last weeks is the Anti-repression work some people were doing for some time now. As people are in prison for many weeks or sometimes even months we do our best to support them. For this we currently need support ourselves…people joining us for a longer period as well as practical help for the people in prison. If you want to support contact us by mail!

Furthermore we continue to support the several squats with food boxes and other support. Also we are still cooking for Tsamakia. Due to the heavy police presence and arrests of the last weeks we cook now only few portions daily for Tsamakia. Instead we give out more food boxes and since a few days we are also providing food for some of the local Roma people.

Surprisingly there has also been some good news in the past weeks. While the current emptying of the islands means deportation for many it also can mean a ticket to Athens for few. We are happy about some friends who finally managed to legally leave the islands. All of them after struggling here months and many with an uncertain future and another long waiting time in Athens. But still… its one step forward, and we could celebrate a few happier goodbyes in the past month.

Keep updated and come by in May or June if you have some weeks to spare…we will need you!

As always with a lot of Love & Rage, 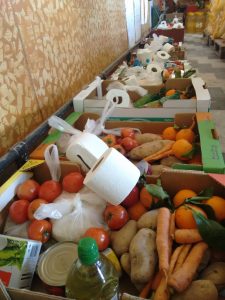