Skip to primary content
These days are busy days for us. We are still working on cleaning the old beach and at the same time building the new social center. Also in these days cops started to bother us more and more.
During the last weeks they controlled us and the car several times before or after food distribution, thus delaying it and annoying us without any reason or further purpose. Also they have visited our rented space in the center three times now, two times taking all persons that were in the place to the police station. As if his wasn’t enough, they also came by the new squats and announced the eviction.
The first day in the new building of the social center they came while children were playing during the lunchtime. Without any eviction paper they entered the building to force everybody who didn’t look european enough to come with them. Two European women questioned the legitimation of their behavior and ended up in getting beaten by one plainclothesman who refused to identify himself afterwards. Luckily everybody got out of the police station and Camp Moria quite fast and despite the repression our work goes on.
For now we still are in the space, not simply giving it in to their threats. We are still continuing to build and run it and we don’t plan to leave it after simple threats without any legal groundings. Still we are cooking several hundred portions of food every day. And still we fight for sustaining the autonomous spaces for all refugees, migrants, travelers and visitors that need them.
Also still we need support and people to join us for winter! 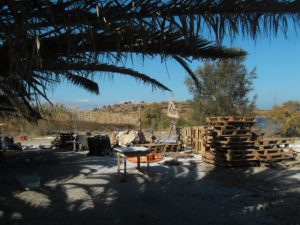